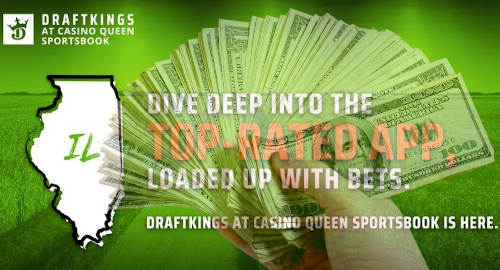 Illinois bettors pushed their state’s sportsbooks to new heights in October, with both handle and revenue setting new records.

Figures released Thursday by the Illinois Gaming Board (IGB) show the state’s eight licensed sportsbooks handled wagers worth $434.6m in October, 42.4% higher than September’s previous record. Revenue was up over six-fold from September to a record $42.2m, with the state’s share coming to $6.3m.

Retail betting accounted for less than $25m of October’s handle, a share that will grow even smaller in November as casinos were forced into their second pandemic lockdown on November 19. All the more reason to celebrate Gov. J.B. Pritzker having once again extended the exemption for mobile bettors to register new accounts in person through January 9.

Illinois betting has a new king, appropriately enough named DraftKings and its local Casino Queen partner, which together handled wagers worth $141.4m in October. That was more than enough to dethrone reigning monarch Rivers Casino Des Plaines/BetRivers ($115.5m), while the tandem of FanDuel and Boyd Gaming’s Par-A-Dice casino ranked third with $105.5m.

However, BetRivers held onto the betting revenue crown with $12.9m, while DraftKings ($11.5m) narrowly beat out FanDuel ($11.1m) and PointsBet was well back of the leaders with $5.1m.

For comparison’s sake, the state’s 10 pandemic-limited casinos brought in slightly more than $79.1m in combined slots and table game revenue in October, of which the state and local community share came to around $21m. Rivers Des Plaines claimed the lion’s share ($30.1m) of this slots & table tally.

Meanwhile, a group that includes the owner of the Chicago Cubs is the latest to target US sports betting opportunities. Monday saw the initial public offering of Marquee Raine Acquisition Corp, a special purpose acquisition company (SPAC) formed to explore opportunities in “interactive entertainment and games, real money gaming, digital media, sports and sports-enabled assets,” among other areas.

Marquee Raine is comprised of The Raine Group (whose co-founder John Salter is a DraftKings board member) and Marquee Sports Holdings, whose principals include the owners of the Chicago Cubs (who in September struck a deal with DraftKings to operate a sportsbook at Wrigley Field).

Barely a week goes by now without SPACs making waves in the gaming industry, with the latest coming last week when Foley Trasimene Acquisition Corp II made a $9b deal for online gambling payment processor Paysafe. DraftKings got its SPAC feet wet last year and Rush Street Interactive is set to follow any day now.