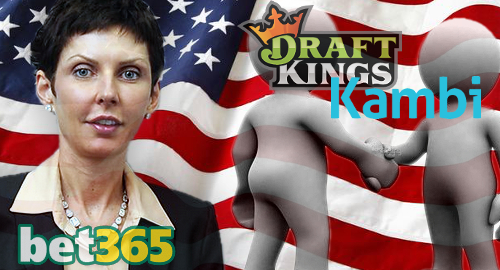 US sports betting news comes quicker than a teenager on prom night these days, so let’s get right to it.

The two parties first hooked up last June and the first fruits of their union came that August in New Jersey’s regulated market. But Kambi CEO Kristian Nylén said the companies “have developed a symbiotic relationship” that “has only improved over time.”

It’s unclear how this deal squares with rumors that spread in June about DraftKings buying Kambi rival SBTech. DraftKings CEO Jason Robins‘ Thursday comments were limited to saying that Kambi’s backend sportsbook technology had made the company “a key partner” for DraftKings.

Local media quoted WV Lottery Director John Myers saying both companies were “very close” to getting the regulatory nod to launch their respective betting apps. Myers said testing is “completed on one [app] and ongoing on another,” and while he didn’t have an official launch date, Myers expressed confidence that both apps would be up and running in time for the start of the upcoming NFL season, which is now only a couple weeks away.

West Virginia got its first mobile wagering app in the dying days of 2018, but the BetLucky app went dark in March, and legal disputes between casino operator Delaware North and its betting tech suppliers have kept the app offline ever since. Myers said Wednesday that he doesn’t expect the BetLucky app to reappear before football season.

West Virginia’s land-based betting market reported turnover of $7.6m and revenue of $704k in the five weeks to August 3, which marks the start of the state’s 2020 fiscal year. Penn National Gaming’s Hollywood Casino at Charles Town Races claimed the overwhelming bulk of both turnover ($6m) and revenue ($540k).

On Thursday, the operator officially invited the state’s bettors to register for the site’s “pre-live” phase. The site is currently only available during certain time periods and there’s no mobile app available to date, although Bet365’s New Jersey-licensed online casino does currently offer an Android app and an iOS app is reportedly in the pipeline.

Bet365 also has a pending launch in New York after signing a betting deal last November with Empire Resorts’ Resorts World Catskills casino, although the company behind that property has a lot on its plate at the moment.