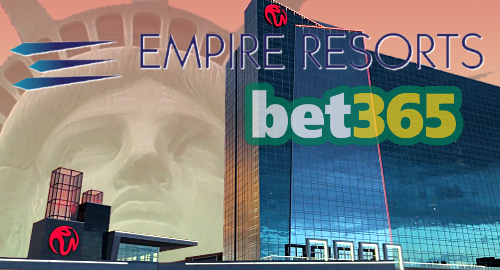 On Wednesday, Bet365 announced a 20-year online and land-based “strategic alliance” with Empire Resorts’ Resort World Catskills property, which opened its doors this spring. The partners plan to launch sports betting and online gaming operations under the Bet365 brand and split profits 50/50 after Bet365 recoups its startup costs.

A Bet365 subsidiary will also buy up to $50m of Empire stock, which would make Bet365 the second largest shareholder in Empire. Wednesday saw the close of the first tranche of this share purchase, giving Bet365 a 4.9% stake in Empire.

New York has yet to legalize either sports betting or online gambling, meaning the Bet365-Empire alliance is, for the moment, entirely prospective. But Simon Betteley, president of Bet365 affiliate Hillside (New York) LLC, said the state will eventually become “one of the most significant online and sportsbook markets in the United States.’

In July, Bet365 inked its first US tie-up with Hard Rock Atlantic City, although the fruits of this partnership have yet to launch.

Bet365 isn’t alone in pursuing speculative New York deals. DraftKings inked a betting deal with the del Lago Resort & Casino in July, the Tioga Downs racino has a pact with Paddy Power Betfair’s FanDuel brand, and Kambi has a deal with the operator of Rivers Casino & Resort Schenectady.

DraftKings said construction of its ‘DraftKings Sportsbook at Resorts’ is “near completion” and the company hopes to begin taking wagers there by “late November,” pending approval from the New Jersey Division of Gaming Enforcement (DGE).

DraftKings first hooked up with Resorts last June on an online and mobile sports betting partnership that has proven highly popular with bettors in the state’s legal wagering market. News of the new land-based operation comes just days after DraftKings announced it would open its first retail sportsbook this Friday at Mississippi’s Scarlet Pearl casino.

The Resorts/DraftKings book will feature five betting windows and 12 automated kiosks, along with the usual assortment of video walls, stadium-style seating, food & beverage options as well as bar-top electronic slots.

Resorts already has a land-based betting partnership with European operator SBTech, and none of the parties involved has yet to indicate what the DraftKings deal means for SBTech.

KAMBI GOES GREEN(WOOD)
And speaking of Kambi, the company confirmed Tuesday that it will provide both online and land-based sportsbook services for Greenwood Gaming & Entertainment’s Parx Casino outside Philadelphia. Parx is expected to launch its wagering operations before the year is through, pending final approval of the Pennsylvania Gaming Control Board.

Kambi’s deal also allows for the possibility of providing sports betting services for Greenwood Gaming in neighboring New Jersey, via Greenwood’s defunct racing operation in the Garden State, which is allowed to offer wagering under the state’s betting rules.