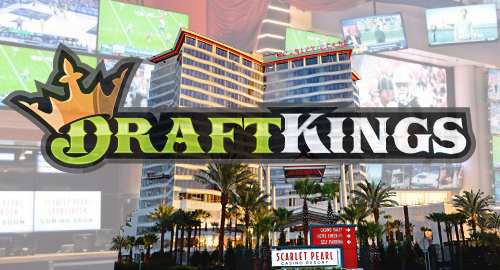 On Monday, DraftKings announced that it had reached a deal with the Scarlet Pearl Casino Resort in D’Iberville, Mississippi to open the new ‘Draftkings at Scarlet Pearl Sportsbook’ this Friday (16). The deal follows DraftKings receiving a wagering license from the Mississippi Gaming Commission.

The new sportsbook, which will be overseen by Station Casino veteran Nicholas Sfanos, will be a revamped version of the Scarlet Pearl’s existing PRL Bar. The venue is being kitted out with a suitably impressive array of big-screen TVs broadcasting any number of sports events, and DraftKings also says it will “soon” be offering live in-play betting via three betting windows.

DraftKings was first to launch mobile wagering in New Jersey’s legal betting market but the company’s archrival FanDuel has been quicker in expanding to other betting states, including both Mississippi and West Virginia. Mississippi’s licensed sports betting operators handled $31.8m in wagers in September.

RHODE ISLAND BETTING DELAYS PROVE COSTLY
Rhode Island was supposed to launch sports betting – powered by William Hill US and International Game Technology – last month but the latest word from the state government is that legal wagering at the Twin River Casino won’t commence until sometime around Thanksgiving (Nov. 22), while the Tiverton Hotel & Casino is expected to follow suit not long afterward.

Back when the state approved wagering this spring, it estimated a windfall of $23.5m in its 2018-19 budget. According to a Sunday report in the Providence Journal, the slower than expected launch of legal wagering has forced the government to trim this sum by $12m. Thankfully, the state’s slots and table games are reportedly performing above expectations, which is helping to soften the blow.

JETS TROLLED OVER MGM PARTNERSHIP
Given that its home stadium is located in the legal betting oasis of New Jersey, it’s not surprising that the New York Jets have been the NFL’s most aggressive team in taking advantage of the league’s new relaxed policy toward gambling tie-ups.

However, the team’s recent official gaming partnership with casino operator MGM Resorts came in for some aerial trolling prior to Sunday’s game, when a small airplane briefly circled MetLife Stadium trailing a banner reading ‘SHAME ON JETS/MGM #ENDGUNVIOLENCE #STOPMGM.’

The gun violence in question is undoubtedly the October 2017 murder of 58 concertgoers by a lone gunman firing from a window in MGM’s Mandalay Bay property in Las Vegas. In July, MGM filed lawsuits against the victims of this attack in a legal gambit aimed at transferring liability claims to federal court, where the company believes it stands a better chance of prevailing.

While the plane’s message has no real relation to gambling, it could spark copycat efforts by anti-gambling campaigners who don’t want to see further connections between sports and betting made in the minds of football spectators.