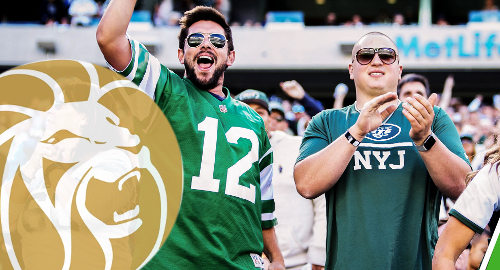 On Wednesday, MGM announced that it had entered into a “first of its kind” multi-year deal with the Jets. MGM called the pact “the most comprehensive and integrated gaming partnership” to date between a gaming operator and the NFL since the league relaxed its anti-gambling stance this summer.

The deal involves the usual signage and branding opportunities, but also allows Jets fans access to “mobile play-along predictive game I Called It,” which will be available in the Official New York Jets App but will be labeled as “presented by” MGM’s in-house interactive gambling brand PlayMGM (which, as of August, includes a sports betting component in New Jersey).

The I Called It game is free-play and includes both pre-game and in-play options, but players can (for the moment, at least) only win non-cash prizes. However, MGM notes that the deal allows the company to promote “PlayMGM’s online gaming platforms and mobile apps to millions of fans,” thereby allowing New Jersey-based Jets fans to inadvertently stumble into a real-money betting opportunity.

The MGM pact is the second gambling deal the Jets have revealed this week, following news that online gambling operator 888 Holdings had become an official team sponsor. That deal raised eyebrows due to the fact that 888 is licensed to offer sports betting in New Jersey, where the Jets play their home games.

Prior to this week, the only official NFL-gambling tie-ups had been between teams and strictly land-based casinos in markets (Maryland and Oklahoma) that didn’t permit legal sports betting.

MGM announced Monday that it had become an official gaming partner of the National Hockey League, a deal that includes access to proprietary player data for in-play wagering markets. MGM signed a similar pact with the National Basketball Association in August.

On Tuesday, MGM CEO Jim Murren told analysts that his company was conducting a “vast number of discussions’ with teams and leagues not just in North America but around the world, with the idea of partnering with entities who shared the same philosophies regarding the rapidly converging fields of gambling, entertainment and sports.