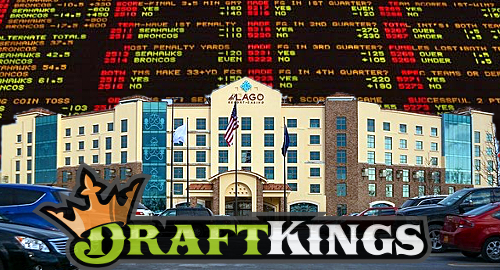 On Monday, DraftKings announced that it had reached a deal with the del Lago’s owners to provide the casino with a physical sportsbook as well as an online and mobile sports betting product, just as soon as state legislators approve the necessary sports wagering legislation.

This is the second US single-game sports betting deal for DraftKings, which previously announced a betting tech deal with Atlantic City’s Resorts Casino Hotel (which has yet to launch). It’s also another coup for B2B betting tech provider Kambi, which announced a technology partnership with DraftKings last month.

Sports betting would be a welcome addition to the del Lago’s gaming palette, as the venue has struggled financially since it opened its doors last year. In January, Moody’s Investors Service cut its outlook for the venue to ‘negative,’ citing the casinos’ projections that its first-year revenue would come in around $100m below its original projections.

New York legislators made a half-hearted effort to approve single-game sports betting legislation following the US Supreme Court’s May ruling that struck down the federal betting prohibition. But the legislature’s 2018 session closed without a vote on either chamber’s betting bills, meaning DraftKings’ del Lago deal is likely a ‘wait until next year’ (at the earliest) scenario.

However, a Times Union report on the New York State Gaming Commission’s Monday meeting indicated that the state is investigating the option of proceeding with land-based wagering at the state’s commercial casinos under the 2013 law that allowed those casinos’ construction.

Ron Ochrym, the Commission’s acting-Executive Director, was quoted saying that the Commission continued to “work on regulations that would effectuate sports gambling under existing statutory language,” but noted that there are “a number of thorny policy [areas] that staff have been considering, including whether the existing law can be read so as to authorize mobile wagering without new statutory enactments.”

Regardless of how fast it happens, DraftKings CEO Jason Robins claimed to be “thrilled” with the del Lago deal, citing the New York market’s potential to be “one of the largest revenue opportunities for future sports wagering operators.’

Ditto for Brent Stevens, del Lago’s co-chairman, who called these current times “an incredibly important moment for gaming in the Upstate region” and the DraftKings deal as “a tremendous move forward for our property in general.”