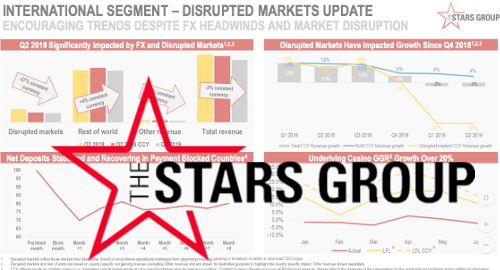 However, if one assumes that the UK-facing Sky Betting & Gaming (SBG) acquisition, which took effect in July 2018, was always part of TSG, overall revenue would have fallen 2% and adjusted earnings would be down 1%, although some of this effect was attributable to unfavorable currency fluctuations.

The international segment, which is still dominated by TSG’s flagship poker brand PokerStars, was far less buoyant. Total revenue was down 8.1% to $322m, as the poker vertical fell 11.7% to $191.5m. Casino revenue managed a 2.3% rise to $104.3m, while betting was down 7% and ‘other’ revenue dipped by one-third. Overall, international active users were down 5%.

The company blamed the international decline on “continued disruptions and regulatory headwinds” in certain markets, aka payment-blocking in Russia and Norway. TSG claims net deposits in its ‘disrupted markets’ have stabilized since the payment blocking commenced, although they’re still nowhere near their previous levels.

The company was forced to withdraw from Switzerland and Slovakia and is also minding its Ps and Qs in the Netherlands to avoid being labeled a ‘cowboy’ when the new licensing regime kicks in.

In Australia, the BetEasy brand reported sports betting revenue of $64m (+4.6%) but the division booked an operating loss of $4.3m. Active users were down 12% thanks to the company’s ongoing efforts to focus on more “higher-value, recreational customers” aka purging winning bettors from the former William Hill Australia operations.

The addition of SBG allowed TSG to draw 36% of its overall revenue from betting, while online casino’s share rose five points to 31%. Online poker slipped from a 53% share in Q2 2018 to just 30%. ‘Locally regulated or taxed’ markets claimed a 79% share of TSG’s overall revenue, up 18 points year-on-year.

TSG reduced its FY19 guidance for both revenue and earnings due to a smorgasbord of factors, including currency fluctuations, those ongoing ‘disrupted’ markets, the below average betting performance in the UK in Q1 and costs associated with its US expansion.

US & GERMAN OPTIMISM, RUSSIA APPLICATION PLANS
TSG used its analyst call to hype the possibilities of its new US-facing Fox Bet joint venture , which aims to launch in both New Jersey and Pennsylvania ahead of the NFL season kickoff. Since Q2 ended, TSG inked betting deals with Penn National Gaming and New York’s Akwesasne Mohawk Casino Resort, which, along with TSG’s existing Eldorado Resorts deal, brings TSG’s potential betting access to 20 US states.

Robin Chhabra, who will head up Fox Bet, said the JV expects to incur around $40m in costs this year and that figure could rise in 2020 depending on how many more states launch legal wagering. The company plans to break out its US operations as a distinct division next year and the aim is for the US division to break even by 2022.

As for Russia, TSG CEO Rafi Ashkenazi claimed the company was making solid sequential improvement on its ability to evade Russia’s payment-blocking efforts. Askhenazi also said the company would apply for a Russian betting license using its PokerStars Sports brand, although he offered no timeline for when this application might be submitted.

The BetStars brand appears destined for the ash heap of gambling history, as TSG plans to use the PokerStars brands (Stars Betting, Stars Gaming) in international markets where its SBG unit can’t rely on a tie-up with a strong Sky broadcast partner. So basically everywhere except Germany and Italy.

Speaking of Germany, TSG just inked a new partnership with broadcaster Sky Deutschland to boost its relaunch of TSG’s German-facing operations under the banner of Sky Bet Germany. Chief legal officer Marlon Goldstein said the company’s existing license in the state of Schleswig-Holstein “permits us to offer all products in all [German] markets.”

That latter sentiment will likely come as news to the Schleswig-Holstein government, which recently renewed its online licenses with the condition that the sites curtail their online casino operations in other German states.

Goldstein wouldn’t commit to TSG pursuing a new nationwide German sports betting license should the option present itself in the near term, presumably because applicants have already been told that they’d need to halt all online casino activities in order to be considered eligible.

As for the rest of the international segment, TSG said it expects to relaunch its Switzerland operations in H2, although the company has yet to confirm its required land-based casino partner. Ashkenazi also said TSG was “about to launch in Argentina,” although the province of Buenos Aires has yet to identify which seven companies will receive local licenses.