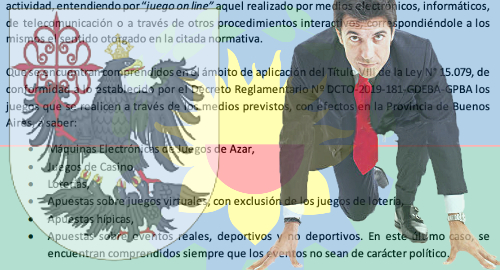 A six-member committee has been appointed to score applicants on a variety of fronts, including each applicant’s approach to responsible gambling initiatives, anti-money laundering practices, the types of casino games and the number of in-play sports betting events they’re capable of offering.

Applications for the 15-year licenses must be accompanied by payment of ARS5.5m ($122k). The lucky recipients of Buenos Aires licenses will be required to pay ARS65m, with 40% upfront, another 40% due at the end of the first year of operations and the remainder at the end of year two. Licensees will also have to put up a guarantee of ARS130m to ensure there are funds to cover any involuntary implosions.

Many Buenos Aires firms have been frantically negotiating with international online gambling operators to present joint venture license applications. Spanish affiliate InfoPlay reported that UK-listed 888 Holdings has teamed up with Boldt SA, which until recently held a monopoly on slot machine operations in the province’s state-owned land-based casinos.

Local media outlet La Política reported that Casinos de Buenos Aires, which is run by Manuel Lao Hernandez, the former Cirsa boss who held on to the company’s Argentine business when he sold out to Blackstone Group last year, has reportedly struck a partnership with Greek lottery and betting operator Intralot.

Spanish operator Codere, which earns the bulk of its revenue from its Argentine operations, is reportedly teaming up with two unidentified firms, one from the UK and one from Israel. Local entrepreneur Daniel Angelici is reportedly working on a deal with The Stars Group, whose PokerStars site was the subject of an domain-blocking court order in Argentina’s second largest province Córdoba last November.