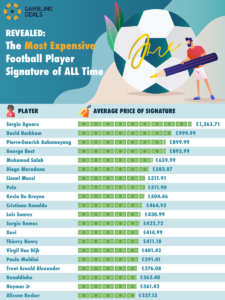 Even in his passing, the signature of Maradona remains one the most expensive in football. According to gamblingdeals.com, a signature from the ‘Hand of God’ is more valuable than an autograph from Lionel Messi or Cristiano Ronaldo.

Soccer fans globally will go the extra mile to grab their piece of sporting memorabilia. Maradona’s signature is valued at £582.07, ahead of Lionel Messi (£511.91) and Cristiano Ronaldo (£464.93).

Surprisingly, it’s another modern-day Argentinean striker, with a Maradona connection that has the most expensive signature in football. Former son-in-law, and Manchester City striker Sergio Aguero. A piece of memorabilia signed by the Manchester City forward is valued at an eye-watering £1,363.71.

Sitting in third place is Arsenal’s Gabon striker Pierre-Emerick Aubameyang. A signature from the 2018-19 Golden Boot winner will set the average fan back £899.99.

While you will find the names of Neymar Jr and former Ballon d’Or winner Ronaldinho make the list, some signatures remain elusive for football fans.

Gamblingdeals.com found that former defender Vinnie Jones has the most exclusive signature in football. Only three items of memorabilia are available bearing the former Wimbledon defender’s autograph.

Legendary Chelsea striker Didier Drogba’s autograph is also hard to come by. Drogba’s signature will set Blue’s fans back on average £256.55. But with only eight pieces of memorabilia listed, his autograph is a rare find on the football memorabilia market.

Some footballer’s autographs are easier to obtain than others, with Lionel Messi fans able to access 281 listings of signed memorabilia online. Cristiano Ronaldo (230), Dele Alli (171), Eden Hazard (122) and Luis Suarez (114) round out the top five.