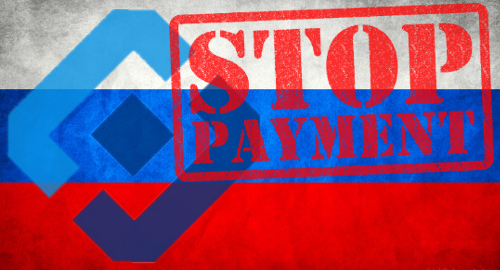 On Thursday, Russia’s Federal Tax Service (FTS) added 16 names to its list of companies for whom Russian financial institutions are forbidden from processing payments with local gamblers. The last update to this list occurred in late January.

The bulk of the new additions are operators based in Curacao and Cyprus, including familiar faces such as Bonnal Ltd (1xBet), Shamoo Holding Ltd (MostBet) and Panbet Curacao NV (MarathonBet).

Russia shows no sign of giving up its efforts to prevent its citizens from gambling with anyone other than the roughly 20 online sportsbooks that have received local permission to operate, even as many of these Russian licensees have internationally licensed versions of their brands that offer customers poker and casino products that Russian law currently prohibits.

GOOGLE BACK IN THE HOT SEAT
Russian authorities are also working hard to ensure that local residents who may just be getting interested in gambling have a harder time locating forbidden online options. Last Friday, Russian telecom watchdog Roskomnadzor announced that it was considering a new administrative offense case against Google after determining the tech giant was failing to block “more than a third” of prohibited domains from appearing in Russian search results.

Last December, Roskomnadzor fined Google RUB500k (US$7,500) for failing to connect to Russia’s federal state information system (FGIS), which contains the list of forbidden domains. Roskomnadzor is now considering imposing a fine of up to RUB700k—the maximum amount possible under current law—for this second offense.

Last week, Roskomnadzor boss Alexander Zharov told Interfax that Google’s domain-filtering efforts had at one point reached 80% efficiency, but the company had then “relaxed” its efforts, after which the compliance rate slipped to 70%. Zharov left open the possibility that Google might be spared a second fine if they “suddenly increase their filtering function to almost 100%.”

Tatyana Nikitina, who heads up the FAS’ advertising control and unfair competition division, told TASS that her bureau wanted “the right to add sites that host illegal casino ads to the register of prohibited sites so that Roskomnadzor would block them later.”

VPN LAGGARDS WON’T FACE PUNISHMENT … YET
Late last month, Russian users of Kaspersky Secure Connection’s virtual private network (VPN) software began reporting that the software was no longer allowing them to access sites on Roskomnadzor’s naughty list. Users who attempted to visit such sites were greeted with a notice saying that the domain in question “is not available in the Russian Federation.”

Kaspersky was one of 10 VPN providers that was warned in March that they had 30 days in which to connect to the FGIS or face the consequences. Kaspersky, which is based in Russia, is so far the only VPN firm to comply. One of the other nine providers shut down its Russian operations while the rest vowed to ignore Roskomnadzor’s demands.

At present, these defiant VPN services remain accessible by Russian punters, and Roskomnadzor’s Zharov told Vedomosti that his office would likely hold off acting until the government approved new legislation that would significantly hike the financial penalties such companies would face for defying Russian law.