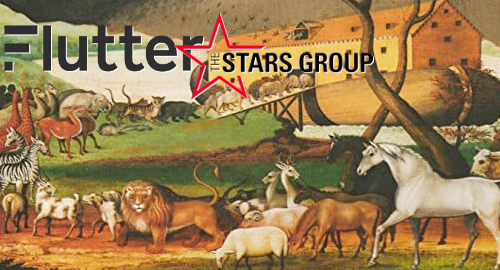 The gambling mega-merger of Flutter Entertainment and The Stars Group (TSG) will be a done deal by May 5, after which the hard work of integrating the parties’ multiple gaming brands will commence.

Last week, shareholders of the UK-listed Flutter and the Nasdaq/Toronto-listed TSG approved plans to combine the companies’ multi-brand and multi-jurisdictional operations under the Flutter banner. On Thursday, the companies offered more details on how this marriage of two 800-pound gambling gorillas will work.

The enlarged Flutter will employ “a federal operating model,” which gives local teams “the autonomy to respond to developments in each of their local markets while still having access to the substantial resources that the broader Group has to offer.”

In the long run, Flutter is shooting for a “four-divisional management and operating structure,” in which TSG International will fuse with PPB. Once the necessary technical changes are made, Paddy Power will move into a new UK & Ireland division that will include Sky Betting & Gaming.

Flutter CEO Peter Jackson said the strength of the two companies’ combined assets will allow the enlarged Flutter to “approach the future with confidence in these uncertain times.” Given the current regulatory mood, Jackson also stressed that Flutter would “drive a race to the top when it comes to responsible gambling best practice across the sector.”

Jackson offered praise for TSG CEO Rafi Ashkenazi, who was originally scheduled to become the new Flutter’s chief operating officer but announced last month that he would instead join Flutter’s board and serve as a consultant to help the integration of TSG brands.

Flutter shareholders were positively giddy at Thursday’s announcement, pushing the shares up 7% by mid-day, although they finished Thursday up a more modest 3.2%. TSG’s shares are presently up over 5% on the Nasdaq.