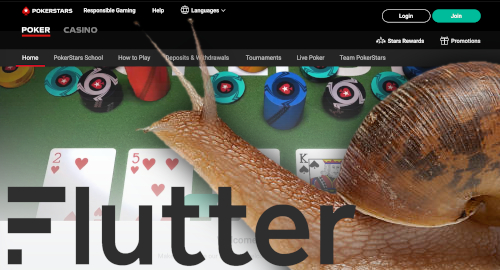 In a trading update issued Wednesday, Flutter said its overall revenue in the three months ending September 30 totaled £1.325b, up 27% from the same period last year. The company boosted its full-year earnings projection from £1.175b-£1.325b to £1.275b -£1.35b, although that’s not counting an expected loss of £160m-£180m in its US-facing operations.

The Q3 stats assume that The Stars Group, which officially became part of the Flutter family this spring, was fully contributing to both the most recent quarter and Q3 2019. The PokerStars unit was by far the least impressive component of Flutter’s Q3, with revenue of £262m, down roughly £1m year-on-year (although up 5% on a constant currency basis).

Stars’ Q3 casino revenue was up nearly one-third but poker fell 10% to “pre-COVID run rates” as this spring’s pandemic lockdowns lifted. Flutter said the casino gains “more than offset” the poker decline thanks to active daily customers rising 23%, although the company acknowledged that the brand had “stepped up our generosity” during the period, so the Stars unit’s earnings likely took a hit.

In Australia, where horseracing operations were unaffected by COVID-19 but retail betting operations faced restrictions, Flutter’s Sportsbet online betting brand saw its revenue jump 76% to £320m, as an 81% rise in betting stakes more than offset a modest decline in betting margins.

Flutter praised Sportsbet’s recent absorption of The Stars Group’s BetEasy brand’s customer base, which resulted in customers who accounted for “over 90%” of BetEasy’s pre-migration revenue “re-engaging” with Sportsbet.

FanDuel’s expansion into newly regulated states pushed betting stakes up 155% year-on-year although betting margins slid 3.1 points to just 2.1% as the company engaged in cutthroat bonus wars in the US customer acquisition frenzy.

FanDuel added 450k new customers while Q3’s real-money actives topped 1.8m and the gains weren’t entirely due to launches in additional states, as customers in existing states doubled year-on-year. The TVG race betting business also reported average daily customers up 122% thanks to the halt to major league play.  FanDuel ultimately expects its US revenue will top £650m this year.

Flutter may take further financial hits once the UK finally conducts its long-awaited review of the Gambling Act 2005. Flutter CEO Peter Jackson penned an op-ed this week in the Racing Post calling the review “badly needed” as gambling regulations “have not kept pace with how society has been changed by technology.”

Jackson said a “root and branch reappraisal” of gambling laws was “overdue” given the “inconsistencies and gaps which the less scrupulous [operators] can exploit with less regard for customer welfare.”

Until the government acts, Jackson said Flutter was “thinking on some big and challenging questions,” including limiting access to gambling products by young adults, imposing limits on time spent gambling, spending and stakes.

However, Jackson expressed less enthusiasm for eliminating gambling sponsorship of sport, noting that “unlike tobacco, gambling is not inherently harmful for an individual if done responsibly and commensurately with someone’s financial means.”