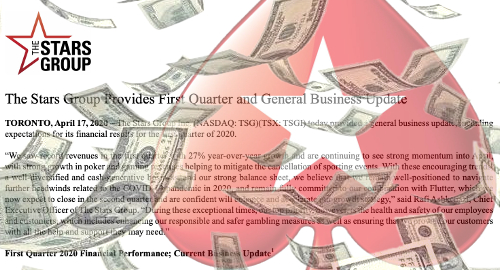 Online gambling operator The Stars Group (TSG) says it’s heading for a record first quarter of 2020 thanks to strong showings in its UK and Australian operations.

In a trading update released Friday, the Toronto-based TSG said it expects its Q1 revenue to come in around US$735m, a 27% rise over Q1 2019’s tally, while operating income will more than double to between $140m-$149m and adjusted earnings will rise by half to $185m.

That said, the company says it expects to book a net loss of between $69m-$79m for the quarter versus a $28m profit one year ago, in part due to costs associated with its ongoing merger with/absorption by UK-listed gambling giant Flutter Entertainment.

Q1’s revenue boost was credited to (a) betting margins doubling to 12%, and (b) increased customer activity in its online poker and casino verticals, which coincided with the mass suspension of live sports events due to the COVID-19 pandemic.

Revenue at TSG’s International unit – primarily consisting of its PokerStars brand, including the brand’s operations in numerous grey/black markets – is expected to rise 11% to $378m despite stakes falling 8%. International revenue shot up 44% in March, which “more than mitigated” the dearth of live sports.

The International unit’s poker/casino surge has continued into Q2, pushing revenue up an astonishing 75%. Which kinda pokes a giant hole in the European Gaming & Betting Association’s claim this week that “well-intentioned concerns of an ‘explosion of online gambling’ are unfounded.”

The UK-facing Sky Betting & Gaming unit saw Q1 stakes tumble 18% but revenue jumped by two-thirds to $297m as margins tripled to an outsized 14.9%. These gains haven’t persisted into Q2, as stakes have fallen 65%, dragging revenue down around 30%.

In Australia, where horseracing has yet to be cancelled, the BetEasy online betting brand saw stakes dip a modest 3% while revenue slipped 2% to $61m. Over the first two weeks of April, racing’s gains have “fully mitigated” the decline in sports revenue.

In the US, where TSG’s PokerStars and the Fox Bet joint venture operate in New Jersey and Pennsylvania, the company booked another $15m in net losses during Q1. The cancellation of live sports has forced TSG to prioritize marketing its Stars casino and poker products, and recent betting approvals in Colorado and West Virginia won’t matter much until live sports resumes.

TSG CEO Rafi Ashkenazi said the company was well-poised to endure the impacts of COVID-19, but warned that the current pause in sports and racing will cost the company up to £15m per month in the UK and AU$10m in Australia, while the International unit appears relatively immune.

Ashkenazi also confirmed that the Flutter merger will get done in the current quarter, assuming TSG shareholders vote in favor of the union at their special meeting on April 24 (which will be held on a virtual basis due to pandemic-related bans on mass gatherings).

If Friday’s share price movements are any indication, TSG needn’t fear any shareholder rebellion. TSG’s shares are currently up over 17% on the Nasdaq exchange and nearly 16% higher on the Toronto Stock Exchange.