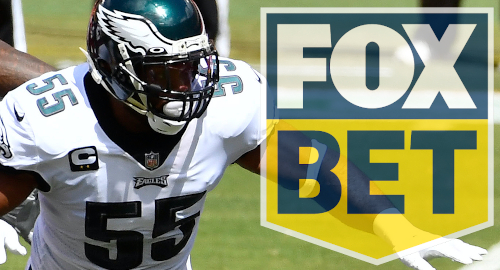 The Philadelphia Eagles have signed a partnership with betting operator FOX Bet, while the National Football League appears more interested in signing betting deals where no one in the US can see them.

On Tuesday, the Eagles announced a multi-year deal with FOX Bet, a brand of UK-listed gambling giant Flutter Entertainment, to become an Official Partner of the team. Despite betting being legal in Pennsylvania, the deal downplays actual wagering in favor of marketing opportunities.

In addition, FOX Bet will enjoy lots of custom promotions and branding opportunities, including ‘prominent’ messaging on the stadium’s signage and LED boards. If and when fans are ever allowed to watch games in person, FOX Bet will sponsor the Eagles Tailgate Crew. Up to 380 fans will also be welcome at a new 4k-square-foot FOX Bet Lounge that will feature an ‘interactive activation room’ with lots of TVs.

The Eagles are following in the footsteps of the Denver Broncos, which have so far struck deals with three betting operators (BetMGM, Betfred and FanDuel), while BetMGM also has a betting partnership with the Detroit Lions. All of which is possible ever since the NFL cleared its clubs to sign such deals this spring.

The league itself has also been busy on the sponsorship front, having recently announced deals with several international betting partners. Costa Rica-based BetCris signed on as the NFL’s official Latin American betting partner, while 888 Holdings now has a similar pact covering the UK and Ireland and Flutter’s Sky Bet brand is the league’s new official betting partner in Germany.

Those deals followed the NFL’s initial foray into direct betting partnerships with Australia’s Tabcorp Holdings in September 2019. So if you’re following along, the league has now signed four betting deals, none of which involve US-based operators.

It’s almost as if the NFL desperately wants to profit from legal wagering yet still feels skittish about the inherent hypocrisy of doing so when it’s been blathering on for years about the alleged threats betting poses to the integrity of its games. Odd, that.