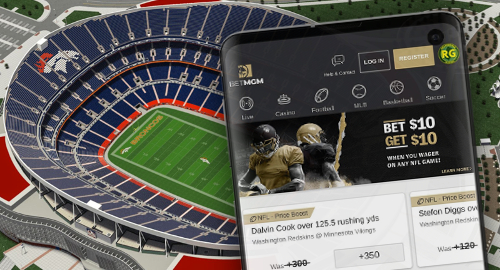 In addition to the usual branding opportunities and the creation of ‘fan experiences’ via the Broncos digital properties and at Empower Field at Mile High, BetMGM will also create a free-to-play mobile prediction game that will allow users to win non-cash prizes.

Roar Digital will also be allowed to open a BetMGM Lounge at Empower Field, in which fans over 21 years of age can partake in alcoholic beverages and receive “live odds and betting assistance.” So no on-site sportsbook but lots of guidance on how to load the BetMGM betting app.

BetMGM appears to have struck a far better deal than UK betting operator Betfred, whose betting partnership with the Broncos called for the launch of a sports betting lounge outside Empower Field (local media has described it as a ‘hospitality tent.’)

FanDuel was the first betting operator to strike a deal with the Broncos, which was the first NFL team to announce an official betting partnership after the league’s February announcement that it wouldn’t cast any of its franchises into the sin-bin for daring to embrace legal wagering. The team had suggested three betting partnerships was its upper limit, but who’s to say that won’t go out the window if bookmakers keep writing large checks.

BetMGM’s deal came just 24 hours after GVC and MGM announced a further $250m investment into the BetMGM venture while vowing to spend whatever it takes to achieve dominance over their US rivals.

Colorado’s legal betting market officially launched in May, and the ranks of wagering options continues to grow. On Thursday, DraftKings announced that its Colorado-licensed mobile betting app would be complemented by a ‘temporary’ retail sportsbook at Twin River’s Mardi Gras Casino in Black Hawk starting this Friday (10).

The temporary book will feature eight self-service betting kiosks, a cashier window and several TVs. Construction of a permanent Mardi Gras sportsbook is well underway and will ultimately include a ‘large feature bar’ along with a VIP Lounge area and a whole lot more TV screens. The launch will make seven DraftKings-branded retail sportsbooks across five US states.