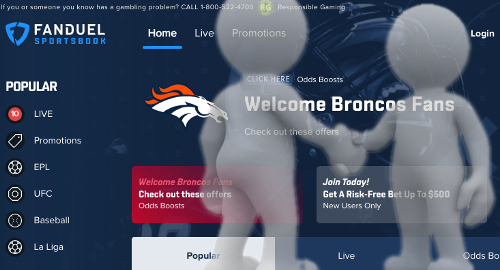 The Denver Broncos have made history by becoming the first National Football League team to sign an official sports betting partnership with the FanDuel Group.

On Monday, the Broncos and FanDuel announced the latter’s new status as an official sports betting and daily fantasy sports (DFS) partner of the Mile High team. The deal allows FanDuel to use Broncos trademarks across its betting and DFS offerings in Colorado, as well as access to “robust marketing assets ranging from in-stadium signage to radio, television and digital advertising.”

The ‘multi-year’ non-exclusive deal comes one month after FanDuel, a division of UK-listed giant Flutter Entertainment, launched online betting in Colorado via a hookup with local casino operator Twin River Worldwide Holdings. FanDuel and the Broncos promise to offer unspecified “once-in-a-lifetime experiences” for betting customers, which we really hope means an up-close opportunity to watch GM John Elway apply his impressive bicuspids to a cob of corn.

Last year, FanDuel inked a league-wide DFS partnership with the NFL, but the Broncos deal marks the first official sports betting tie-up involving an NFL team, following the league awakening from its Rip Van Winkle slumber and discovering to its amazement that this was in fact the 21st century.

The NFL previously allowed teams to ink deals with gaming companies that operated betting units but only if betting wasn’t the focus of the relationship. The NFL also inked an ‘official wagering partnership’ but the fact that it chose to take this bold step with a company literally on the other side of the world reflects its ongoing timidity regarding betting issues.

With the NFL’s betting sponsor virginity now officially history, expect a flood of similar announcements over the coming weeks and months leading up to the new season’s anticipated kick-off in September. That is, assuming the league isn’t forced to undergo a similar pandemic-related halt that derailed the other major pro leagues’ seasons.