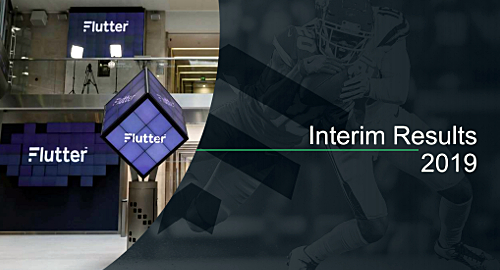 On Wednesday, Flutter revealed that its revenue in the six months ending June 30 was up 18% year-on-year to £1.02b, but ‘underlying’ earnings were down 10% to £196m and pre-tax profit tumbled 24% to £81m. Investors weren’t pleased, pushing Flutter’s share price down nearly 2% by the close of Wednesday’s trading.

Last November, Flutter warned investors that it was facing a major profit hit due to rising costs in several markets. On Wednesday, Flutter said its cost of sales was up 35% due to new taxes and fees in Australia, increased remote gaming duty in the UK and rising betting duties in Ireland. Sports betting expansion in the US helped push total operating costs up one-fifth.

The revenue gain would have been a more modest 9% if one excludes contributions from the Republic of Georgia-facing Adjarabet and the US-facing operations of daily fantasy/sports betting operator FanDuel, neither of which contributed to the H1 2018 results.

FanDuel’s strong showing to date in America’s newly regulated betting markets pushed Flutter’s US market revenue up 148% year-on-year to £160m (+55% on a pro forma basis) but the US segment’s underlying earnings were down nearly three-quarters to just £3m thanks to the costs of rolling out new sportsbooks in individual US states.

In New Jersey, where FanDuel has captured 50% of the betting market, cross-sell from bettors allowed Betfair’s locally licensed online casino to more than double its revenue year-on-year, while the site’s market-share gained five points to 15%.

Flutter’s online segment, which includes Paddy Power, Betfair and Adjarabet, reported revenue up 8% to £497m, with the gains almost entirely due to Adjarabet. Sports betting reported flat revenue as stakes fell 2%. Online gaming did its bit, with revenue jumping 29% to £163m, but it wasn’t enough to prevent online operating profit falling 3% to £118m.

The Australia-facing Sportsbet segment’s online sports betting revenue was up 14% to £207m but increased costs – mainly new point-of-consumption taxes in some Aussie states – pushed profit down 6% to £47m.

Flutter’s retail operations in the UK and Ireland saw revenue dip 4% to £156m as the new fixed-odds betting terminal stake reduction pushed machine gaming revenue down 21% to £43m. The stake reduction didn’t take effect until April 1, and Q2’s machine revenue was down 44%, meaning the toll on overall retail results will only increase as the year progresses. Retail operating profit slid 37% to £15m.

Flutter warned about its future earnings being impacted by ‘switch offs’ in certain grey markets, including Switzerland, Serbia, Slovakia and Albania. Flutter estimates these skedaddles will cost the company £11m in 2019.

Flutter also intends to market the hell out of its FanDuel betting operations as the NFL season kicks off, and these customer acquisition costs will contribute to an expected £55m earnings loss for the US segment in 2019.