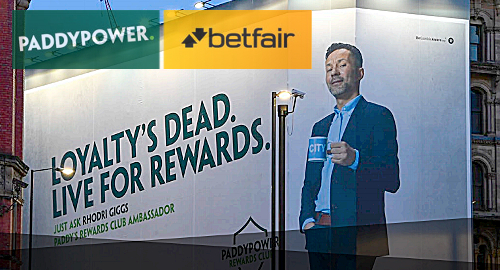 On Wednesday, PPB revealed that its 2018 revenue hit £1.87b, 7% higher than the year prior, while underlying earnings fell 5% to £451m and pre-tax profits slipped 11% to £219m. The profit plunge was blamed on the company’s US market expansion efforts, including its purchase of FanDuel’s US-facing operations last spring. Unimpressed investors pushed the share price down 2.6% at the close of Wednesday’s trading.

The report’s biggest headline was the company’s proposal to rebrand as Flutter Entertainment plc in May, subject to shareholder approval at the company’s annual general meeting. The company insists that here are “no plans to use this historical name for consumers,” but believe the name change will reflect the “increased diversity of our brands and operations.”

The Flutter brand originally belonged to a betting exchange rival to Betfair, which ultimately merged with Betfair in 2001. Flutter co-founder Josh Hannah was a member of Betfair’s board until 2014, roughly two years before Betfair merged its operations with Paddy Power.

Anyway, back to PPB’s financials. The company says its 2018 earnings hit was largely due to its £24m investment in America’s new legal sports betting market, which PPB CEO Peter Jackson called “the most significant development to occur within the sector since the advent of online betting.”

Online revenue was up 5% to £948m, with sports revenue up 3% to £678m despite a 3% fall in betting handle. Exchange betting, which represented 38% of online betting, reported revenue falling 2% last year, which the company blamed on weather-related racing cancellations.

Online gaming revenue jumped 13% to £270m, a significant turnaround from gaming’s 2% decline in 2017. The company credited the rise to better cross-sell, the release of new gaming apps and a “significant enhancement” of the gaming product embedded in its sports apps.

PPB’s Australian online betting brand Sportsbet reported revenue up 6% to £403m, but margins fell 1.5 points, blunting the impact of a 23% rise in betting stakes. A 9% rise in the cost of sales also helped push Sportsbet’s gross profit down 4% to £282m.

PPB’s retail revenue in the UK and Ireland slipped 1% to £331m, with sports revenue off 3% to £221m and machine gaming up 3% to £110m. PPB claimed that the April 1 reduction in fixed-odds betting terminal stakes won’t have a material impact on its “sports-led retail strategy,” although it notes that if the stake reduction had applied in 2018, its overall revenue would have fallen up to 2.5%.

PPB said 2019 was so far progressing in line with its expectations, and the company has laid out a four-pillar strategy for future growth. This includes maximizing profitable growth in its core markets of UK, Ireland and Australia, growing Betfair internationally, attaining “podium positions” in additional regulated markets and “rigorously” pursuing US market opportunities.

PPB said its New Jersey sportsbook contributions would “remain negative” through 2019 due to ongoing investments in customer acquisition, but expects positive contributions to commence “18-30 months post-launch.” PPB expects its total additional US betting expenditure to come in between £145-155m in 2019, up from £106m last year.

In addition to the FOBT stake reduction, PPB faces additional headwinds in a number of its core markets, including new point-of-consumption taxes in Australia, the UK’s Remote Gaming Duty rising six points to 21% and increased betting duties in Ireland. All told, PPB estimates a total impact of around £118m in 2019.