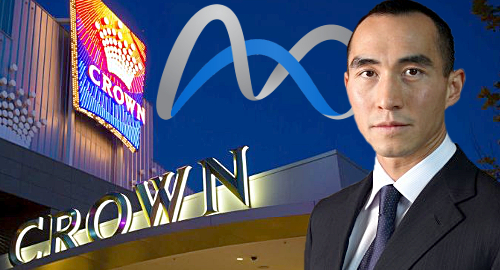 Casino operator Melco Resorts & Entertainment (MRE) has bitten off a nearly one-fifth chunk of Aussie rival Crown Resorts and aims to bite off more as the opportunity arises.

Payment will be made in cash in two equal tranches, the first due in early June, the second no later than September 30. MRE plans to finance the deal through “internal and external sources of funding.” MRE also plans to pursue representation on Crown’s board and “welcomes the opportunity to increase its ownership” in Crown should the opportunity arise down the road.

Melco said Crown “shares a similar corporate DNA” with MRE, and the deal does represent a reunion of sorts, as Melco and Crown were joint venture partners in the Macau casino operations of Melco Crown Entertainment (MCE). That partnership ended in May 2017, when Crown boss James Packer sold the final piece of his MRE stake to Melco boss Lawrence Ho (pictured).

Packer has been dealing with some mental health issues and speculation has been rife that he was looking to cash out his 47% stake in Crown. Other casino operators have reportedly been sniffing around for a possible Crown takeover, including Wynn Resorts, which bailed on acquisition talks in April after overeager Crown execs leaked word to the media.

Crown currently operates casinos in Melbourne and Perth, while its VIP-focused six-star casino/hotel project in Sydney’s Barangaroo district is scheduled to open in 2021. The company also operates the Crown Aspinalls casino in London and the Betfair Australasia online betting site.

MRE currently has casino operations in both Macau and the Philippines, and is busy developing Europe’s largest (for the moment) integrated resort in Cyprus. The company is also vigorously pursuing the chance to open an integrated resort in Japan, which would likely become the company’s flagship property, in addition to Melco’s new corporate HQ.