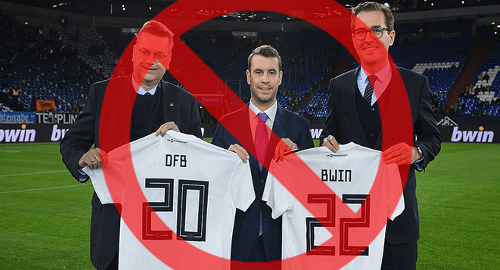 Germany’s online casino crackdown has extended its reach to the nation’s football teams and their sports betting sponsors.

On Friday, German media reported that the Ministry of the Interior for the state of Baden-Würtemberg had written a letter to the German Football Association (DFB) expressing concern that the DFB’s sponsor, GVC Holdings’ Bwin sports betting brand, was offering gambling products that are illegal under German law.

The letter, which was issued with the support of the other German länder (states), pointed out that Bwin offers “online casino and slot games” in addition to its mainstay sports betting product. The Ministry noted that German law “leaves no room for doubt about the illegality of such offers” and warns that if changes aren’t forthcoming, “there is a risk that the advertising of Bwin is prohibited altogether.”

The letter sets up an interesting game of chicken. If German authorities prove serious about enforcing their sponsorship views, German broadcasters may be prohibited from airing football matches in which the logos of Bwin or other German online gambling operators — such as Tipico, which sponsors the Bundesliga (DFL) and teams like Bayern Munich – are visible.

Bwin has had sponsorship ties to the DFB since 2017. In January, Bwin extended its existing sponsorship of the DFB until the end of 2022, ensuring advertising rights to the DFB Cup, the DFB’s third-tier Liga and the Women’s Bundesliga. Bwin also sponsors individual German football teams, including Borussia Dortmund.

Last week, reports emerged that German state telecom regulatory bodies had sent letters to television and radio broadcasters warning them of the illegality of airing commercials promoting online casino products. These warnings reportedly led to a significant decrease in the number of online casino promos on German airwaves.

These regulatory warnings take place as representatives of the 16 German länder prepare to sign the latest version of their federal gambling treaty. The revised treaty will extend the temporary sports betting ‘toleration’ regime until June 30, 2021, after which the hope is that a more permanent regulatory environment can be achieved.

The northern state of Schleswig-Holstein appears willing to sign on to the new treaty, provided it is granted a carve-out that will allow it to renew the 19 online casino licenses the state issued in 2012, the last of which expired earlier this year.

On Friday, German media quoted the head of Schleswig-Holstein’s chancellery Dirk Schrödter saying that the 16 länder were “not far apart” on the issue of sports betting, but “in some cases, however, we have a very different view in the area of online gambling.”

Schleswig-Holstein’s opposition parties aren’t on board with the governing coalition’s online casino plans, with SPD leader Ralf Stegner recently accusing the coalition of wanting to “roll the carpet out for the shady people in the gambling industry.”