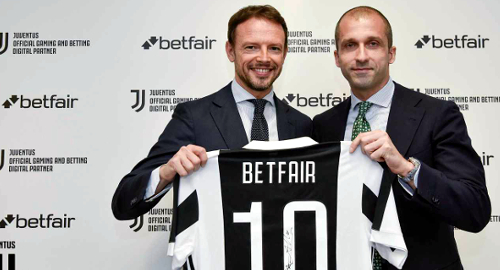 Another week brings another round of online gambling operators forging highly visible ties with sports teams, leagues and pretty much anyone who can lace up a pair of trainers.

On Wednesday, UK exchange betting operator Betfair announced it had signed on as the new official gaming and betting digital partner of Italian football powerhouse Juventus. The deal follows the expiration of the six-month gaming partnership the club signed with Betsson’s StarCasino brand in January.

Betfair’s deal takes effect with the start of the upcoming 2017-18 Serie A season and will continue for an unspecified number of years. The company gets to use the Juventus name and image rights in promotional material, while Betfair’s logo will be splashed across the team’s Allianz Stadium and its various digital channels.

Back in Betfair’s home market, the Kindred Group’s flagship Unibet brand recently announced it had inked a deal to become the new Principal Partner of Birmingham-based Championship side Aston Villa FC. The one-year deal will see Unibet’s logo emblazoned on the front of the kit of both the men’s side and the ladies team.

In a further bid to boost Unibet’s brand awareness in the Birmingham area, the company has also signed a two-year deal with the Warwickshire County Cricket Club (CCC). The deal is the first betting partnership for the CCC, and offers the company a logo presence on the (CCC’s T20 team) Birmingham Bears playing shirts and across the club’s Edgbaston venue.

Still not finished with the sponsorship spending, Unibet announced a two-year deal with the Virgin Australia Supercars Championships. The partnership, which starts this weekend at the Townsville date, will offer Unibet lots of track signage opportunities while the company will develop digital content to give fans deeper insights into what the hell they’re watching.

Shifting back to Europe, GVC Holdings’ flagship Bwin brand has signed on as the main partner of 3.Liga, Germany’s third-tier football league. The two-year deal marks the first title sponsorship deal for 3.Liga and German Football Association VP Peter Frymuth said it “underscores again what a positive development the 3.Liga has taken and what role it has now.”