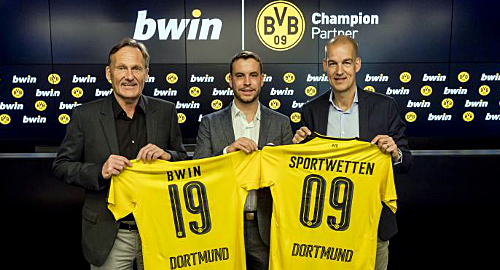 On Wednesday, GVC announced that it had signed on as the newest second-tier ‘Champion Partner’ of Borussia Dortmund. The deal, which spans the next four Bundesliga seasons, is reportedly worth “at least” €3m per season, according to Sponsors.de.

The deal calls for the Bwin logo to enjoy prominent branding opportunities within the team’s Signal Iduna Park stadium, both on LED perimeter banners and via on-pitch ‘CamCarpets’ at each of BVB’s 17 Bundesliga home matches, as well as on the team’s interview backdrops. Bwin will also develop campaigns and promo offers specifically tailored for BVB fans via both online and traditional channels.

Bwin’s regional manager Stephan Heilmann celebrated the betting brand’s Bundesliga return, noting the synergy in the matching colors of the two partners, while BVB’s marketing director Carsten Cramer praised Bwin for maintaining “close ties with German football longer than any other operator in its sector.”

Bwin first hooked up with BVB last November when it inked a media partnership that concluded with the most recent Bundesliga season. Bwin is reportedly in the running to ink a partnership with the German Football Association (DFB), but the answer won’t be known until Friday.

THE SINCEREST FORM OF FLATTERY
Meanwhile, the Khmer Times reported that ‘Bwin’ has found itself in hot water with Cambodian authorities for conducting illegal online gambling operations in the country.

Actually, the ‘Bwin’ in this case is the Bwin Café Net Shop in the country’s capital Phnom Penh, which was raided last Friday after police got word that it was offering illegal online gambling services to customers. Police arrested two organizers and two gamblers, with the latter being fined about $25 apiece while the former were charged with running an illegal gambling business.

We’re reasonably confident that GVC’s Bwin had nothing to do with this Cambodian caper, as piggybacking on the strength of popular gambling brands is a common tactic among low-level Asian operators. Still, GVC does have a high tolerance for grey- and black-market operations…