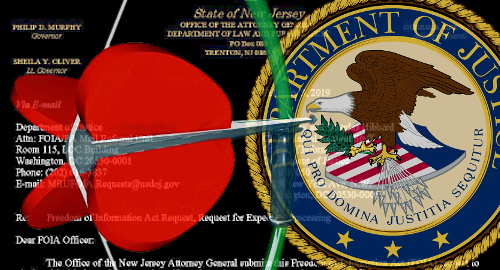 The US Department of Justice’s online gambling views are under simultaneous attack by at least two state attorneys-general and the association representing all US lottery operators.

On Tuesday, New Jersey Attorney General Gurbir Grewal and Pennsylvania Attorney General Josh Shapiro wrote a joint letter to the DOJ detailing their “strong opposition” to its recent opinion that the 1961 Wire Act applies to other forms of gambling beyond sports betting.

The attorneys-general urged the DOJ to “withdraw its opinion altogether or assure us that DOJ will not bring any enforcement actions against companies and individuals engaged in online gaming in our states – where it is appropriate under state law.”

The DOJ said it would abstain from enforcing its new opinion for 90 days in order to give intrastate online operators time to amend their wicked, wicked ways to comply with the new opinion. It remains to be seen what action the DOJ might take when that pause runs out in mid-April.

Grewal has also filed a freedom of information request to determine how the DOJ arrived at its new opinion. In particular, Grewal wants to know whether the DOJ had some help from Las Vegas Sands boss Sheldon Adelson, a confirmed online gambling opponent who led unsuccessful efforts in recent years to roll back the 2011 DOJ opinion that led to states launching online gambling and lottery operations.

Last month, the Wall Street Journal reported that the DOJ’s new opinion bore an uncanny resemblance to legal advice submitted to the DOJ in 2017 by an Adelson-funded lobbyist. Last week, ABC News reported that Adelson had donated $500k to a legal fund for cronies of US President Donald Trump caught up in the Mueller probe of Russian interference in the 2016 presidential election.

Grewal said there was “no good reason” for the DOJ to rethink its 2011 opinion, and rumored pressure from “out-of-state casinos and their lobbyists” was “not a good enough reason to reverse course and undermine the online gaming industry.”

STATE LOTTERIES ALSO ON THE WARPATH
Tuesday also saw a response to the DOJ’s opinion by the North American Association of State and Provincial Lotteries (NASPL), which has long opposed any effort to roll back the 2011 DOJ opinion that led to six US states offering some form of online lottery sales.

In a letter issued Tuesday, the NASPL said the DOJ’s new opinion “creates a substantially detrimental impact on the lottery industry” as well as “substantial uncertainty concerning the legal status of lottery transactions.”

The NASPL claims the 2011 DOJ opinion “set in motion critical enhancements and improvements” in lottery “infrastructure, functionality, sales and communications.” The NASPL claims it’s ready to work with the DOJ “to assist in the understanding and resolution of satisfactory solutions for the confluence of technology, policy and law” described in the DOJ’s latest opinion.