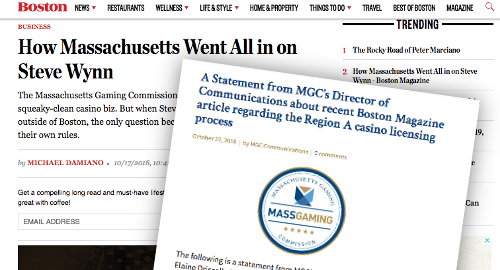 The Massachusetts Gaming Commission (MGC) has pushed back hard against a local media report that accused the regulator of bias toward Wynn Resorts’ Boston-area casino project.

On Monday, the MGC’s Director of Communications Elaine Driscoll issued a statement calling last week’s Boston Magazine article – titled How Massachusetts Went All in on Steve Wynn – “remarkable for its exclusions, misrepresentations and innuendo” and “a flawed and misleading narrative of the Region A casino licensing process.”

The Boston Magazine article was published a few weeks after MGC chairman Stephen Crosby abruptly resigned, saying he’d been accused of prejudging the outcome of the MGC’s probe into what Wynn execs knew regarding allegations of sexual harassment involving then-CEO Steve Wynn. The investigation’s findings could determine whether the company is allowed to operate its in-development Encore Boston Harbor project, which is scheduled to open in June 2019.

The article claims that after Wynn was awarded the sole Boston-area casino license in 2014, “it became clear that the commission’s vetting hadn’t been as thorough as Crosby had promised, and that Crosby himself had overlooked red flags and made excuses for Wynn.”

Wynn beat out a rival bid from the Suffolk Downs racetrack, which originally partnered with Caesars Entertainment until that company was deemed ‘unsuitable’ due to ties with a company with a connection to an alleged Russian mobster, prompting the track to partner with casino operator Mohegan Sun on an ultimately futile bid.

But when it came time for Wynn’s suitability vetting, the article claims Crosby acted on a Wynn request to replace Spectrum Gaming Group investigators with a company that lacked Spectrum’s experience and resources in the reliably murky gaming market of Macau, where Wynn had a thriving business.

The article details other allegations of favoritism, but the MGC’s Driscoll says it’s all based on “a demonstrably false premise” and “regurgitates baseless claims from previous lawsuits that were wholly struck down” by state judges.

Throughout her response, Driscoll accuses Boston Magazine writer Michael Damiano of ‘ignoring’ or ‘disregarding’ information supplied to him by the MGC. Driscoll closes by saying the MGC expects “intense scrutiny” of its decisions but will defend itself against “baseless claims” and won’t be distracted from “the important work ahead,” including the release of the Wynn suitability report’s findings.

Both the magazine article and Driscoll’s response are lengthy and detailed, and should be read by anyone with an interest in this seemingly never-ending brouhaha. The rest of you, get back to live-tweeting Trump rallies or whatever.