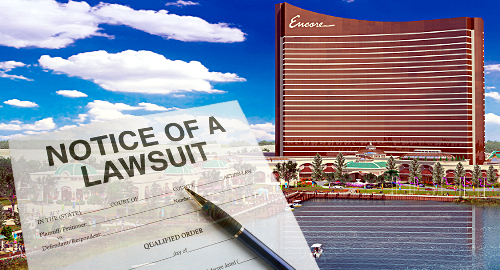 Casino operator Wynn Resorts has been hit with yet another lawsuit in the seemingly endless fight over its right to operate gaming in Massachusetts.

On Tuesday, Massachusetts media reported that Sterling Suffolk Racecourse, which formerly owned the Suffolk Downs racetrack in East Boston, is suing Wynn Resorts in federal court for allegedly conspiring to fix the application process that resulted in Wynn being awarded the sole Boston-area casino license in 2014.

Specifically, the lawsuit alleges that Wynn conspired to “fix the application process, circumvent laws in place to prevent the infiltration of mob elements, and interfere and eliminate various regulations aimed at protecting the public at large.”

Said mob elements are a reference to Charles Lightbody, a convicted felon who co-owned the plot of land that Wynn purchased as the new home of its Encore Boston Harbor venue (formerly Wynn Boston Harbor), which is slated to open in June 2019. The other former co-owners are also defendants in the new Suffolk suit.

The ‘fixing’ is an apparent reference to Paul Lohnes, another co-owner of the land, who happened to be a former business partner of Massachusetts Gaming Commission chairman Stephen Crosby, who recused himself from a review of Wynn’s land deal, but not before declaring Suffolk Downs’ casino partner Caesars Entertainment ‘unsuitable’ to hold a local gaming license.

The new lawsuit further alleges that the land on which Encore is being built – the site of a former Monsanto chemical plant – is “a toxic waste site loaded with levels of arsenic still so high that a child day care center would not be permitted to be housed there.”

The awarding of Wynn’s license has survived any number of legal challenges by losing applicants and cash-hungry host communities, but the new lawsuit arrives just as the MGC is preparing to issue its report – likely next month – on whether Wynn execs knew of sexual harassment allegations against former CEO Steve Wynn while the company was undergoing its own suitability vetting.

Steve Wynn has since left the company and his name has been removed from the Boston project’s license, but the MGC could still determine that the company wasn’t honest during the suitability process and force the sale of the $2.5b in-development project. The desire to position itself as the project’s heir apparent appears to be the primary object of Suffolk’s new lawsuit.

After losing its Boston casino bid, Sterling Suffolk sought to wind down its racing operations before selling the racetrack property to a developer in May 2017. The lawsuit seeks a total of $3b in damages.

Mass Live quoted a Wynn spokesperson saying the company would mount “a vigorous defense” against the new lawsuit and its “frivolous and without foundation” claims.