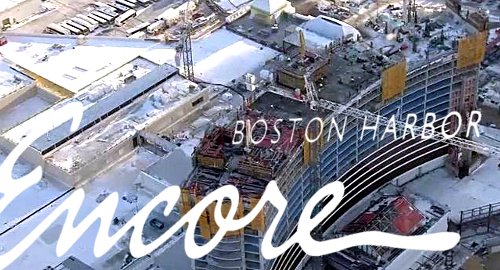 On Friday, Wynn CEO Steve Maddox met with members of the Massachusetts Gaming Commission (MGC) to discuss removing Wynn Resorts founder Steve Wynn’s name from the gaming license of the $2.4b Wynn Boston Harbor resort casino project in Everett, just north of Boston, which is scheduled to open in June 2019.

Wynn Resorts suggested in March that a rebrand of the property was likely. At Friday’s hearing, Maddox announced that the property would now be known as Encore Boston Harbor. Encore is the name of a resort property that opened in 2008 as the second phase of the Wynn Las Vegas resort.

Maddox told the MGC members that while “the Wynn brand is strong,’ he also understood “the cultural sensitivity” surrounding the numerous harassment allegations brought against Steve Wynn this year by female staff members.

Steve resigned in February and has sold off his entire holdings in the casino company. Maddox told the MGC that the company now had “no business association with Steve Wynn,” yet this separation, whether in terms of business and branding, may not be enough to ensure the company retains control over the Everett project.

The MGC hope to make a ruling on removing Steve’s name from the gaming license next week, but that’s a separate issue from the ongoing probe the MGC is conducting into how much Wynn’s senior management knew about the allegations against their former leader. Should the MGC not like what its probe uncovers, it could declare Wynn Resorts unsuitable to operate gaming in Massachusetts.

Should that worst-case scenario play out, it’s unknown who might take over the unfinished Everett project. On Thursday, rival MGM Resorts, which is opening its own Massachusetts casino this August, played down reports that it was planning on swapping projects, insisting it was committed to its own MGM Springfield project.

The Mohegan Tribe, whose casino properties include the Mohegan Sun in Connecticut and which unsuccessfully vied for the sole Boston-area casino license that Wynn received, told The Day that it remained interested in setting up shop in Boston, should that sole license go back on the market.

However, the MMCT Joint Venture between the Mohegans and the Mashantucket Pequot Tribal Nation that is building a casino in northern Connecticut close to MGM Springfield, shot down media reports that it would be interested in taking over the Springfield property should MGM take over the Everett project. An MMCT spokesperson called such reports “rumor mill trash.”