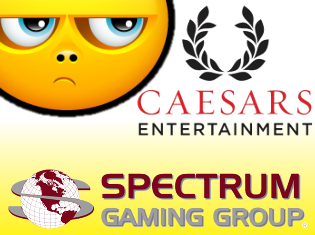 Caesars had long taken issue with the MGC’s determination in October that Caesars was unsuitable to conduct casino operations in the state. The MGC claimed that its investigators had uncovered a Caesars investor with ties to Russian mobsters, while Caesars claimed Crosby had “intentionally and wrongfully” undermined their Boston bid in order to favor a rival bid by Wynn Resorts involving real estate owned by a former business partner of Crosby’s.

On Friday, the Las Vegas Review-Journal‘s Howard Stutz reported a statement by Spectrum legal eagle Steve Ingis that poked holes in Caesars’ claim. Ingis stated that Spectrum had “submitted a draft report to the IEB recommending that certain specified issues pertaining to Caesars’ suitability be addressed at an adjudicatory hearing, at which Caesars would be required to establish its suitability by clear and convincing evidence. Notably, Spectrum did not recommend a finding of suitability or a finding of unsuitability in its draft report.”

Caesars, which claims to have spent over $100m in its pursuit of the Boston casino project with then-partner Suffolk Downs, has yet to comment on Ingis’ statement. Caesars is seeking unspecified damages from Crosby, the withdrawal and permanent sealing of the MGC report on Caesars and another chance to throw its hat back into the Massachusetts casino licensing ring.