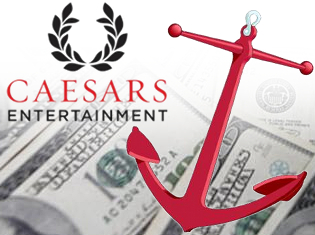 Struggling casino operator Caesars Entertainment lost a whopping $761.4m in Q3, despite revenue falling a mere 0.7% to $2.18b. As usual, the fact that Caesars had to ante up $563m in interest charges on its crippling $23.8b debt load erased any potential for black ink.

The less than stellar results are the perfect capper to a month that has seen US federal authorities investigating possible violations of anti-money-laundering laws at Caesars Palace in Las Vegas, the biggest one-day drop in Caesars share value in almost a year and Caesars’ Massachusetts ambitions going up in smoke after investing around $100m in their pursuit. Seriously, if CEO Gary Loveman decides to go as a sad clown for Halloween, he won’t need a costume.

Net casino revenue was down 7.1% to $1.12b, for which the company blames “continued softness” in the overall US casino market outside Nevada, and the Q2 sale of 45% of its casino operation in Uruguay. Table game strength partially offset “weakening in slot volumes in virtually all domestic markets.” Caesars also reported a three-point decrease in room occupancy rates, yet room revenue rose 2.1% thanks to Caesars raising the average room rate from $89 to $101 via its imposition of new ‘resort fees’ in March.

On a regional level, Caesars’ Las Vegas properties saw revenues rise 5.2% to $773.5m. Improved baccarat volume and hold were singled out as the primary engines behind the 2.9% rise in casino revenue. Vegas property earnings were up 35.7% to $222.4m, boosted by a $20.2m reduction in operating and depreciation expenses.

On the Atlantic coast, Caesars four properties in Atlantic City plus Harrah’s Philadelphia reported both decreased visitation and unfavorable hold, resulting in an 11.7% drop in revenue to $421.5m and a 22% drop in property earnings to $77.9m. A $536.2m non-cash tangible and intangible asset impairment charge resulted in an operating loss of $494.7m for the region. Revenue at Caesars’ 18 properties in the rest of the US fell 4.6% to $744.8m, resulting in a net operating loss of $184.2m. Citing a “slightly unfavorable hold” percentage and regional competition, property earnings fell 19.1% to $162.3m.

In a call with analysts, Loveman declined to offer specifics on how Caesars’ Nevada-facing WSOP.com online poker site has fared since its Sept. 19 launch, saying only that the company had received “positive feedback” from players. Loveman also hyped CIE’s social gaming operations as a “meaningful revenue driver.” While he’s yet to receive approval from New Jersey regulators, Loveman said Caesars fully anticipates going live on Day 1 when the state’s online gambling market officially launches on Nov. 26.