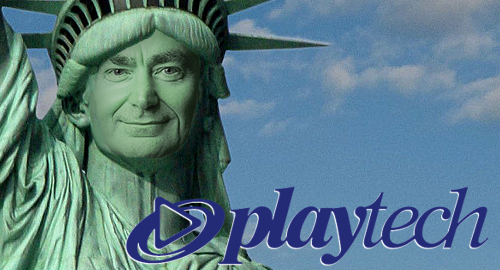 This weekend, the Sunday Times reported that Playtech was preparing to announce that it’s adding Ian Penrose as a non-executive director to the company’s board. The Times further claimed the company was grooming Penrose to take over as Playtech chairman from embattled incumbent Alan Jackson.

Playtech is set to deliver its H1 financial report on Thursday, and will reportedly use the occasion to announce the hiring of Penrose (pictured, in green), a longtime industry veteran who resigned as Sportech’s CEO last year. The Times claimed Penrose was being brought in to “spearhead” Playtech’s desire to enter the US gambling market.

Playtech formerly held a 9.9% stake in Sportech, but sold out in 2013. Prior to that sell-off, Playtech CEO Mor Weizer had touted Sportech’s US-facing online and land-based pari-mutuel betting operations as Playtech’s way of getting its foot in the door of the US market.

Playtech is increasingly keen to geographically diversify its operations and lessen its reliance on Asian grey- and black-market operations. In July, Playtech shares lost over one-quarter of their value after the company warned of fresh challenges in its Asian-facing business.

At one time, these black-market ops might have proved a stumbling block for US regulators, who like to claim they won’t tolerate their licensees behaving badly in other jurisdictions, but are really only concerned with whether operators have any unauthorized US-facing ops. For instance, UK betting giant Bet365 is a major player in China, yet it had no problem striking deals in New Jersey.

There is the small matter of Playtech founder Teddy Sagi, whose conviction for major stock fraud led to a stint in an Israeli prison in the 1990s. Sagi’s significant holdings in Playtech reportedly contributed to UK regulators blocking the company’s efforts to acquire financial trading firm Plus500 in 2015.

Sagi has since reduced his Playtech holdings to a single-digit slice, which may be small enough to allow his ongoing role as a Playtech advisor to slip past the regulatory gatekeepers.

It’s unclear what role Playtech hopes to play in the US market. The company was always more than just a tech supplier through its PT Entertainment subsidiary’s B2C brands Titanbet and Winner. In April, the company took a much larger step down this road by paying over $1b for a controlling stake in Italian gaming giant Snaitech.