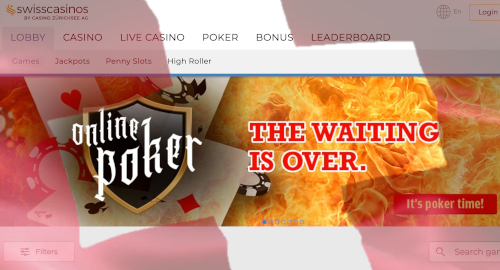 On Wednesday, Switzerland’s federal gaming board (ESBK) announced that the Federal Council had extended the license of Casino Neuchâtel to allow it to offer online casino games alongside its land-based offering. The as yet unnamed site will be allowed to launch once the ESBK approves its technical platform.

Casino Neuchâtel is the ninth of Switzerland’s 21 casinos to have made some progress toward launching online operations, although only seven of these online casinos are actually functional. Casinos Austria International’s Casino Lugano, which was cleared to launch in April, has yet to debut its online offering.

Meanwhile, Swisscasinos.ch, the online offering of the Swiss Casinos Group’s Casino Pfäffikon-Zürichsee, recently unveiled its new online poker product, the first of its kind in the Swiss market. Some Swiss-licensed online casinos offer live dealer poker products from the likes of Evolution, but these involve players competing against the dealer, not each other.

The Swisscasinos.ch online poker offering is powered by Playtech’s iPoker network, as Playtech also provides the site’s random number generator and live casino games. It remains to be seen if and when Switzerland’s other online casino licensees might mimic their rival’s poker progress.

PokerStars and other internationally licensed online poker heavyweights withdrew from Switzerland last year as the country proceeded with its locally licensed regulated market. Many of those operators promised swift returns with the help of local partners but these promises have so far come to naught.

Meanwhile, the ESBK announced last week that Fabio Abate had been appointed the new president of the regulatory body. Abate, an independent lawyer in Locarno, will take over on January 1 as incumbent Hermann Bürgi rides off into the sunset after nearly seven years at the wheel.