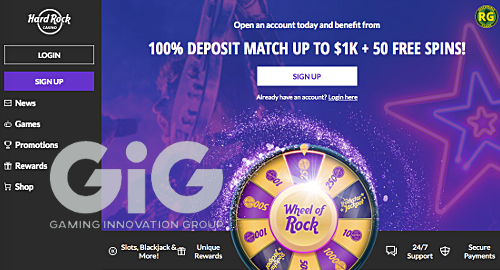 On Thursday, the Hard Rock venue’s online gambling technology partner Gaming Innovation Group (GiG) announced that it had received a transactional waiver from the New Jersey Division of Gaming Enforcement to provide the Hard Rock with a real-money online casino platform.

GiG’s press release indicated that the Hard Rock online casino would launch “later this month” – all two days of it – but the site appears to be already active. The site is casino-only, i.e. no poker except video poker, but then poker has become something of an afterthought in New Jersey’s red-hot online gambling market.

The site’s FAQ mentions the promise of live dealer games “broadcast directly from Atlantic City.” There are currently two New Jersey sites offering a live casino product — the Golden Nugget and Befair (which piggybacks on the Nugget’s gaming license).

GiG CEO Robin Reed expressed delight at the Hard Rock site launch, calling it “a first step in our mutually ambitious plans to take market share in the regulated online gambling market in the US.”