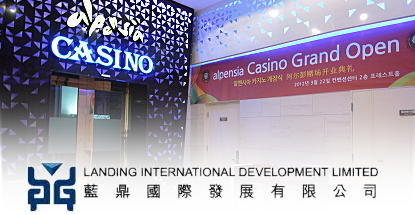 Tuesday’s announcement reveals that Landing paid Jumbo Prize Ltd. HKD 869m (US $112m) to acquire casino operator Wealth Seed Group Ltd., which operates under the name Alpensia Casino. Landing will pay HKD 210m in cash and 3.6b shares, which will give Jumbo Prize a 16.3% stake in Landing. The deal expects to close by the end of February.

The Alpensia casino currently has 16 gaming tables – nine baccarat, three blackjack, one roulette, one poker, one Tai Sai and one big wheel – and 42 slot machines. Landing plans to expand this to 70 gaming tables.

The property is about three hours drive from Seoul and within two to four hours flying time from major cities in China, Japan and Taiwan. The skiing resort – a main host venue for the 2018 Winter Olympics – is located in the same province as South Korea’s leading casino Kangwon Land, the only one of the country’s 17 casinos that accepts locals. The local airport is one of two designated by the national government to allow visa-free 72-hour entry points for Chinese visitors.

This is Landing’s third casino project in South Korea, following two joint ventures on Jeju island with Genting Singapore. The first JV is the stalled $2.2b Resorts World Jeju integrated resort that the partners hope will break ground in Q2 2015, assuming the new provincial governor can be convinced of the project’s merits. The other project is a $117m plan to establish a casino in the Hyatt Regency Jeju hotel that is expected to open in January.

Landing chairman Yang Zhihui said his company was “optimistic and very confident about the future of the casino industry in Korea.” Yang said the Alpensia casino will benefit from exposure Pyeongchang derives from the Olympics while Landing’s “horizontal business expansion” will allow the company to “expand the Group’s market coverage“ and “take root” in the country.