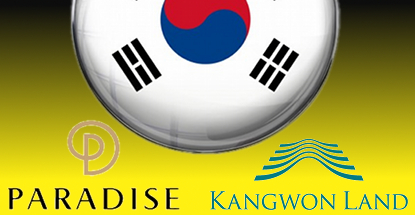 Paradise operates five of South Korea’s 17 small-scale casinos and is itching to break ground on its Paradise City joint venture with Japan’s Sega Sammy Holdings. The deal to build the nation’s first true integrated resort was signed last year and construction was originally supposed to commence last month. This deadline was pushed back to sometime in November, but little’s been heard on the subject since.

Kangwon Land, the only casino in the country that admits South Korean residents, saw its number of visitors fall 3.6% in Q3, which resulted in a 6.6% decline in non-gaming revenue to KRW 18b. In contrast, gaming revenue rose 5.9% to KRW 376b ($342m) – twice the total revenue at all five Paradise casinos, if you count such things. It helps to know that while fewer visitors may be coming to Kangwon Land, the number of incoming Chinese is “rapidly rising.” Profit edged up 0.9% to KRW 105.5b.

Like Paradise, Kangwon Land is having its own construction issues. Earlier this month, prosecutors let it be known they were investigating officials at a Kangwon Land subsidiary overseeing development of a theme park near the casino. The officials are suspected of accepting bribes from a construction company working on the project.

Prosecutors allege that the construction company hired by High1 Sangdong Themepark ended up subcontracting the project – expressly forbidden by the development contract – yet High1 officials took no action. The subcontractor’s financial accounts contain entries worth KRW 10m ($9k) listed as “gratitude to High1” and tens of millions more as “golf expenses.”

The Korea Times quoted prosecutors saying the subcontractor has confirmed offering money to High1’s CEO and that they were now trying to determine what favors the subcontractor may have been offered in return. All High1 officials have said there’s no truth to the allegations.

Kangwon Land called a halt to the High1 water park project in April after its inspection team raised economic feasibility questions. The company is now trying to figure out what to do with the facilities that had already been completed.