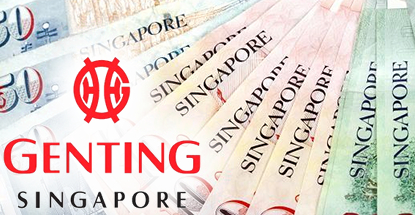 Casino operator Genting Singapore saw its profits cut nearly in half during Q3 after VIP gamblers got a little too lucky. The operator of Singapore’s Resorts World Sentosa reported revenue down 17% to S$644.7m (US $499.6m) in the three months ending Sept. 30 while profit fell a whopping 43% to S$127.1m. Investors ran for the hills, sending Genting Singapore shares to their lowest level since June 2010. The shares are down 30% since the start of the year.

Gaming revenue fell 21% to S$477m while non-gaming revenue dipped 2% to S$167m. High-rollers with hot hands weighed heavily on the results, with the company estimating that a theoretical normalized hold percentage would have added as much as S$143m to its adjusted earnings. The results are even more unfavorable when compared with its crosstown rival, Las Vegas Sands’ Marina Bay Sands, which reported revenue of $735.5m in Q3.

Genting noted that the Asian casino business is “experiencing significant challenges in the face of economic slowdowns in our major visitor markets and other environmental factors.” The company says it’s continuing to engage in the type of marketing and promotional spending that Sands chairman Sheldon Adelson recently dismissed as ‘buying the business’ to make up for Genting’s inability to offer a “quality product.”

SOCIAL GAMING ADVOCATES PRAISE SINGAPORE LEGISLATORS
Sticking with Singapore, the International Social Games Association (ISGA) has publicly commended the local government for “significantly” addressing its concerns over the city-state’s new online gambling bill. The Remote Gambling Bill, which legislators approved last month, severely limits both the types of online gambling and who can offer them, and operators of social games feared the bill’s broad language would also ban their products.

These concerns were subsequently addressed by Second Minister for Home Affairs S. Iswaran, who said social games would be permitted, provided there was no way to exchange virtual credits for real cash. ISGA CEO Luc Delany issued a statement saying his group “appreciates the responsiveness” of legislators and offered its assistance in crafting the specific regulations to put the Remote Gambling Bill into effect.