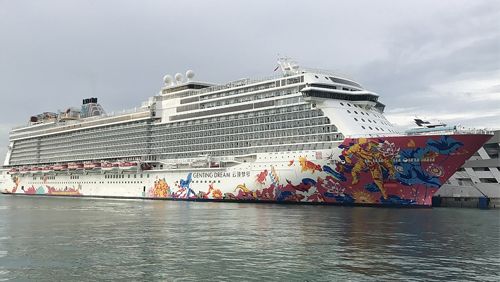 Genting HK has made good on its plans to launch cruises to nowhere. The company’s Genting Cruise Lines arm struck a deal with Singapore to offer the meandering cruises as a way to get people’s minds off the COVID-19 pandemic, and has now made a splash with its first official sailing out of the country, following a similar introduction in Taiwan this past July. There was apparently no shortage of interest, either, for this first trip.

The World Dream set sail this past Friday on its first trip with around 1,400 passengers, about half of its maximum capacity and reportedly the maximum allowed due to anti-coronavirus policies. Those policies also include social distancing procedures in all public areas, increased food and beverage handling rules, 100% fresh air ventilation in the staterooms and public areas, as well as the ship’s inclusion of a new medical facility. That facility includes a Polymerase Chain Reaction (PCR) machine, which can reportedly detect bacteria and viruses much quicker than other methods.

Apart from the PCR machine, all guests and crew will be tested regularly, as well. Before gaining access to the ship, all guests will have to pass a COVID-19 Antigen Rapid Test, and those who are seven years old or older will have to carry a MICE Pod token, which monitors wearers to ensure they adhere to social distancing guidelines. That requirement stems from orders passed down by Singapore’s Ministry of Health.

The cruises are going to be short – only around two or three nights.  However, they should offer some much-needed relief and give people the ability to step away from the stress caused by being on lockdown. However, the cruise industry has often been seen as a breeding ground for the virus, with large quantities of people confined to smaller spaces where the virus can be propagated more easily.

In case there were a sudden appearance of the virus, the World Dream believes it’s ready. In addition to the safety and health measures, it has also designated seven cabins as isolation cabins and has 34 quarantine rooms for individuals that may have come in close contact with the suspected positive case. There is also an intensive care unit ward on the 19-deck vessel that is outfitted with a ventilator.

To say that Genting HK needs these sailings to be successful would be an understatement. The company had leveraged itself pretty thin as it looked to launch an entire fleet of ships and the COVID-19 situation has had a major impact on its plans. It had to suspend payments to creditors in order to keep the business afloat and reportedly has around $3.37 billion in outstanding debt. The chairman of the company, Lim Lok Thay, is said to have put up his entire stake in Genting HK, around 76% of the company, as collateral so things could keep moving forward.