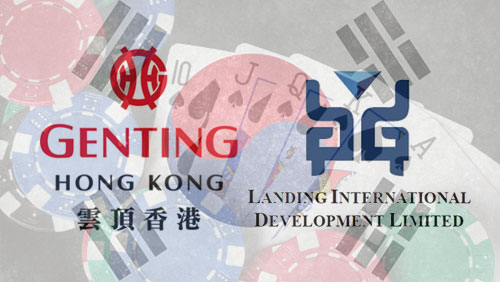 Genting Hong Kong Ltd is on the verge of entering South Korea’s casino market after striking a 50/50 joint venture with Chinese real estate developer Landing International Development to operate and manage a casino in the Hyatt Regency Hotel on South Korea’s Jeju Island.

Genting Hong Kong is expected to invest KRW130 billion ($117 million) to establish a casino inside the Hyatt Regency Jeju that would include about 30 gaming tables and 16 slot machines. Renovations inside the hotel are ongoing to meet the scheduled opening in January 2015. Once open, the casino will be managed by Genting under its own trademarks.

“The transaction will lead to the introduction of the first world-class casino brand to Jeju, marking a key milestone in the tourism industry,” Landing International said in a statement.

“Leveraging Genting group’s international expertise in world-class resort operation, the joint venture will be able to tap on a reliable and reputable platform for the development of Jeju’s tourism industry.”

The partnership between Genting and Landing International extends beyond this new joint venture. The Malaysian casino giant’s Singapore subsidiary, Genting Singapore Plc, has its own joint agreement with the Chinese real estate developer to build a $2.2 billion integrated resort and casino in the same tourist island. That project is supposed to be in the initial stages of development already, but a change in the local government has put those plans on ice. The two partners remain optimistic that the project will meet its 2017 opening schedule, but doing so requires the approval of the new governor of the Jeju Special Self-Governing Province, Won Hee-ryong.

Landing International chairman Yang Zhihui is confident that the renovated casino, one of eight foreigner-only casinos on the island, could help demonstrate the immense benefits of having a world-class operator like Genting in Jeju.

“Our cooperation with Genting HK will introduce to Jeju an international world-class experience and expertise in operating and managing a world-class mega gaming and integrated resort,” Yang said.

“It will be able to greatly enhance the operational efficiency and performance of the Jeju Casino and lay solid foundations for the future development of our businesses in Korea, including our jointly-developed Myth-History Park project, and turn Jeju into a paradise of the North Pacific.”