Genting Hong Kong Ltd projects $180 million in net profit for the first half of the year, a dramatic increase from its net profit of $23 million a year ago. 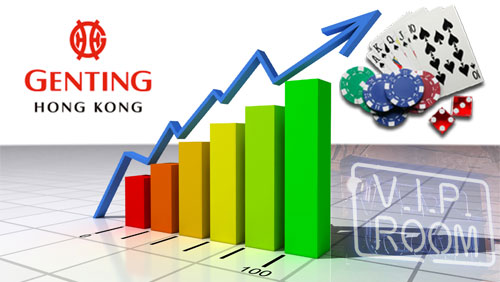 The Hong Kong subsidiary of Genting BHD said in its filing that its disposal of 3.7 percent of shares in Norwegian Cruise Line Holdings is largely responsible for the inflated numbers. The company reported making $153 million from that transaction alone while still retaining 27.7 percent of the company, good enough to still be considered its majority shareholder.

Genting Hong Kong also posted close to $15 million in fair value gains after a revaluation of its financial assets.  The company’s unaudited consolidated results for first half of 2014 expected to come out until August.

Spanish media outlets reported that Genting is looking to make a push to develop and operate a casino in BCN World, a massive gaming and entertainment complex in Barcelona run by development firm Veremonte España SL. Genting, Melco Crown Entertainment and Caesars Entertainment were all tipped to submit bids to secure one of the six casino licenses last Friday, July 25.

Melco signed a deal with Veremonte in May to operate at least one of the casino complexes in BCN World. According to media reports, Caesars and the Enrique Bañuelos-backed Veremonte have also engaged in discussions to develop a €500 million ($673 million) casino in the resort as part of the project’s third phase development. It’s a similar agreement Veremonte had with the Hard Rock Group for the development’s second phase.

Genting’s bid for a casino license in Spain would be independent from Veremonte. Most details behind its bid are still unknown at the moment but we do know that, as part of the conditions laid out by the Catalan Parliament, the Malaysian casino giant would be required to invest a minimum of €300 million ($403 million) in BCN World.

Genting Bhd’s push to be a player in the Spanish casino market is coinciding with a new company initiative by its Malaysian subsidiary, Genting Malaysia, to become a bigger player in its own VIP casino market.

According to PublicInvest Research, Genting Malaysia is planning to increase its five-star category hotel rooms to at least a third of the total room supply by 2020. Under its current setup, 75 to 80 percent of the available rooms in the resort is classified as three-star quality.

The company believes an increased supply of ritzier rooms would better serve the premium mass-market and VIP clients they hope to attract. With more five-star rooms available for guests with deeper pockets, Genting could be in line to expand its long-term yields per customer without undermining the mass-market segment.