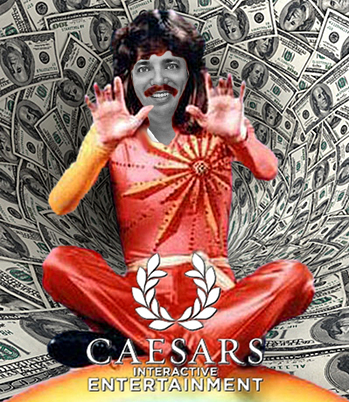 Caesars Interactive Entertainment (CIE), the online arm of brick-and-mortar casino outfit Caesars Entertainment, has acquired the rights to certain World Series of Poker (WSOP) mobile and Facebook app assets from games developer Electronic Arts. As part of the deal, the terms of which were not disclosed, a 19-member team of developers will join CIE’s social gaming division Playtika to work on social poker projects.

CIE’s CEO Mitch Garber recently told his hometown Montreal Gazette that the imminent launch of real-money online gambling operations in Nevada and New Jersey “will have a big effect” on CIE and its parent company. Given that Morgan Stanley has projected US online gambling revenues will top $9b by 2020, there may even be some justification behind Garber’s optimism.

That said, there’s no guarantee Caesars will be around in 2020, because the immediate future is a whole lot less rosy. Based on the time it took Nevada to go from passing legislation to taking its first online wager, Morgan Stanley believes it will be two to three years before more states join Nevada and New Jersey in the ranks of functional online gambling ecosystems that (unlike Delaware) are open to private operators. Given that the combined population of those two states equals 11.5m – roughly equal to that of Belgium – and considering the volume of operators seeking a slice of that online pie, the effect on Caesars won’t be life-altering.

That’s problematic, because in less than two years some $4.6b of Caesars’ total $24b debt comes due. If Caesars can’t convince its lenders to kick the debt can a little further down the road, the company is headed for some major upheaval. CIE, which was recently split off from the parent, may be spared some of the worst effects of this restructuring. Regardless, Garber claims not to be worried about the parent company’s red ink because of “exciting new developments” like a new casino in Baltimore and the world’s largest ferris wheel at the Linq development in Las Vegas.

GARBER A LOUSY KRESKIN
Presumably, Caesars plans to charge $1m per ride of said ferris wheel; otherwise, it’s hard to fathom Garber’s excitement, at least, in terms of the effect on Caesars’ bottom line. But then Garber’s predictions are best taken with a grain of salt. Reminded by the Gazette that in 2009 he’d predicted CIE’s Montreal office would soon have “hundreds” of staffers when it currently has just 46, Garber said he and Caesars had been “anticipating a federal bill that would legalize online poker in the US, but that hasn’t happened.”

(Around the same time Garber was predicting a federal wellspring of online poker riches, this site’s namesake predicted federal online poker wouldn’t happen for at least five years, possibly ten, and that “anyone making business decisions on the basis or with the hopes of the US market magically opening up in the next few years is just wasting their time.” Calvin could have added “and shareholders’ money,” but that goes without saying.)

WHAT COLOR IS THE SKY IN GARBER’S WORLD?
Garber appears to have an equally difficult time grasping the present day situation. While acknowledging his parent company’s massive debt, Garber nonetheless described Caesars as a “highly profitable” outfit. It’s true that Caesars routinely brings in a couple billion dollars of revenue per quarter, but it’s equally true that the company has consistently lost money for the past three years due to the nine-figure interest payments the company is forced to shell out every three months. In other words, you can talk about Caesars’ profits; you just can’t hold them in your hand. The magic required to turn a debt-servicing outfit like Caesars into a profit powerhouse makes Garber the obvious heir apparent to late Canadian magician Doug Henning and his mantra of “it’s not a trick, it’s an illusion.”

Garber’s redefinition of ‘profit’ views Caesars’ debt burden as a momentary distraction, rather than a structural deficit that has no remedy. Garber believes that if it weren’t for its loan obligations, people would appreciate Caesars as the money-making machine it could be if, you know, it wasn’t required by law to pay its bills. But Caesars’ debt isn’t going away, and whatever new revenue Caesars gains from online gambling, all it will buy Caesars is time – and not much time, at that.