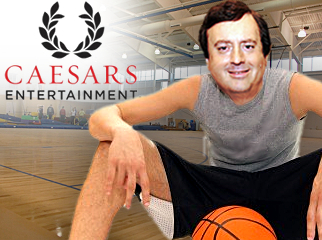 Embattled US casino operator Caesars Entertainment continued its downward trajectory in Q1 2013, reporting a 2.9% decrease in revenue to $2.14b. Caesars’ bottom line showed a $216.7m loss in Q1, which sounds terrible until you realize it’s an improvement over the $281.1m loss in Q1 2012. But look closer, and you realize that a major contributing factor in Caesars narrowing its loss was a $131.9m tax benefit the company received in Q1.

Caesars CEO Gary Loveman (pictured relaxing at right) tried to put a brave face on the results, suggesting that Q1 2012 was “particularly strong, making the year-over-year comparisons difficult.” That’s right, folks. A quarter in which your company lost $281m was a “particularly strong” period. Caesars put much of the blame for the downturn on “weakness in consumer sentiment, particularly in less affluent consumers.”

As is its wont, Caesars bundles the results of its online division, Caesars Interactive Entertainment (CIE), into the catch-all ‘other’ category, which also includes income from “certain non-consolidated affiliates” as well as corporate expenses. For what it’s worth, ‘other’ revenues rose 25.2% to $81m in Q1, for which online activities are credited with driving “most” of the increase. That said, ‘other’ saw net losses rise 67.4% to $86.9m, $52.4m of which stems from a contingent earnout liability relating to the late 2012 acquisition of social game developers Buffalo Studios.

CIE, which includes the World Series of Poker brand, Caesars’ real-money online operations in Italy and France and its social and mobile games businesses, was recently spun off from the mothership into a separate privately-held entity, meaning CIE’s true profit/loss report card may never become public knowledge.

To put things in further (dire) perspective, Caesars paid $574.7m – $2.7m more than Las Vegas Sands’ Q1 profit – in interest on its mammoth debt in the first three months of the year. The company’s books currently show $21.1b of long-term debt plus a further $4.94b in long-term liabilities. There really is only so much debt restructuring and accounting sleight of hand that can be brought to bear against that reality. One could argue that minus this debt, Caesars would be a very profitable company, but that’s basically like arguing that Loveman would be a star National Basketball League point guard were he a foot taller, a hundred pounds lighter, several decades younger and actually played basketball.