“The market can stay irrational longer than you can remain solvent.”
– John Maynard Keynes

The above quote summarizes the greatest, but far from only, danger in selling stocks short. Every investment has some risk, of course, but a short play – essentially a bet that the price of a security will go down – adds to the uncertainty. Relative to a long position (in other words, a straight purchase), a short position requires that investors bet against the general long-term price uptrend that exists in nearly every asset class. Unlike an investor who is long a stock, a short seller can lose more than he can gain; if the stock triples from 10 to 30, the short seller must pay $30 to buy back shares he borrowed and sold for $10. And because of that literally infinite risk to a short seller, timing becomes critical. An investor might have foreseen the housing bubble of the last decade, and bet against the stocks of builders or the bonds backed by residential mortgages in the US. But he had made that bet in 2005, rather than 2007, he very easily could have gone bankrupt before being proven correct.

I’ve recommended avoiding or outright shorting shares of Caesars Entertainment (CZR) multiple times, in large part because of its $21 billion debt load and its exposure to the low-growth US market. That trade worked well in 2012, as the stock dropped for months, bottoming at $4.52 per share in November. But in the barely five months since then, Caesars has shown just how dangerous shorting a stock can be; it has risen 262 percent over that stretch, clearing $18 last month before closing Friday at $16.36 per share.

The risk involved in shorting Caesars is exacerbated by the company’s strategy since its return to the public markets in early 2012. (Caesars, then known as Harrah’s Entertainment, was taken private in early 2008, in a disastrous, top-of-the-market buyout led by investment funds TPG Capital and Apollo Global Management (APO).) In re-floating the stock in February 2012, Caesars released just 1.8 million shares, representing just 1.5 percent of the company’s total equity. This clear attempt to manipulate the stock – which CNBC commentator Gary Kaminsky called “the dumbest thing I’ve ever seen” – allowed for an inflated post-IPO price, as the small supply of shares required far fewer bidders to support the stock. That higher price then allowed TPG and Apollo to later dump parts of their ownership stakes on the market at a better price than they would have otherwise received. According to finviz.com, roughly half of the outstanding shares are now available on the market; a vast increase, to be sure, but a proportion still lower than that of the overwhelming majority of US stocks.

The limited supply of shares affects traders who are short Caesars stock. For one, when the stock was first offered, it was simply difficult to find shares to borrow (the first step to selling short) since so few shares were available to the public. According to NASDAQ data, the amount of shares sold short has risen from 1.9 million as of April 13th, 2012 to 10.4 million as of April 15th, 2013. This is not necessarily a reflection that more traders are interested in shorting the stock (though it may be), but more likely simply a function of how few shares were available a year ago. The more important problem for short sellers is that the limited availability of shares makes a “short squeeze” more likely. When a heavily shorted stock (like CZR) begins to rise, short sellers often come into the market to buy the stock and close out their positions. Since short sellers have to borrow shares, if the stock moves high enough, they may face a margin call and be required to put up cash or have the “buy” order automatically executed by the brokerage house. What can result is almost a panic, where short sellers rush into the market on the wrong side of their own trade, buying the stock at nearly any price in an attempt to prevent further losses, driving the price upward in a vicious cycle.

Indeed, the fact that CZR is heavily shorted, and the availability of its shares limited, has without a doubt contributed to the stock’s strong bull run over the last six months. To be fair, there have been a series of promising developments for the stock; but it also appears that the jumps caused by the good news have been far higher and far quicker than might otherwise be the case. On December 6, the stock rose 11 percent after the company was recommended for an online poker license by the Nevada Gaming Control Board. On February 4th, the stock again saw a one-day gain of 11 percent, after mentioning in an SEC filing that it was planning to sell off part of its interactive division. Three days later, the stock jumped 19% in a day after New Jersey governor Chris Christie issued his conditional veto of an iGaming bill in the state; in a clear sign of a short squeeze, the stock would jump another 38 percent the following day. The stock would give back nearly all of those second-day gains over the next two weeks before taking off again, breaking 18 in mid-March, then give back most of that rise as well. Then, on Tuesday morning, the company made its interactive spin-off plans official, announcing the creation of Caesars Growth Partners, a new entity which will include the interactive and social gaming divisions, along with Planet Hollywood in Las Vegas and the still-unfinished Horseshoe Baltimore. Caesars stock would take off again, gaining 27 percent on Tuesday and finishing the week up more than 33 percent.

Five double-digit percentage gains in less than five months is impressive for any stock, even one as volatile as Caesars. Yet it’s also worth pointing out that, with the exception of Christie’s February decision, the events driving the stock gains were hardly a surprise. The fact that Caesars had gained an online poker license in Nevada – a state where the company has twelve physical locations, and whose senior senator a congressional aide once claimed should be called “Harrah Reid” –  shouldn’t have been a surprise to anyone with the slightest familiarity with the gambling industry. The spinoff of the interactive division has been rumored for months. Indeed, Caesars laid the groundwork for the spin-off by “carving out” those interactive assets over the last few years, leaving them unencumbered by the company’s crushing debt. The CGP spin-off is not some brilliant master stroke by CEO Gary Loveman; it is literally the only option available to the company if it wants to return any value at all to its equity holders. The company’s legacy land-based operations are essentially worthless. The company’s book value is negative; according to the company’s own accounting, the total carrying value of its physical assets is less than the debt on its books. Some of that unsecured debt – debt that is not backed by Caesars’ other properties – yields 22 percent in interest payments, showing that the bond market clearly believes that there is a high likelihood that Caesars will go bankrupt, and that once secured creditors are paid, there will be little, if anything, left for the unsecured bondholders. (Stockholders, in that scenario, would almost certainly be completely wiped out.)

In short, Tuesday’s gain is simply, to quote Keynes, irrational. It was likely driven not by a market-wide decision to re-evaluate Caesars’ potential, but by a few buy orders on the news, many from retail investors, which created a short squeeze and drove the price upward. It seems highly likely that this week’s gains will not hold, as has been the case for not only Caesars in the past but a number of other stocks boosted by iGaming news. 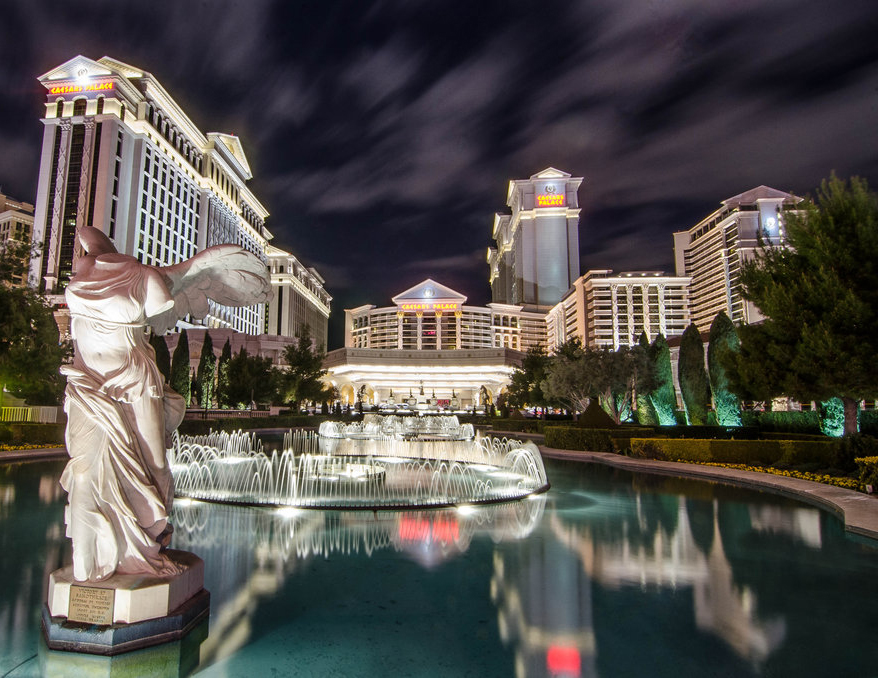 Certainly, the spin-off does not change the equity valuation of Caesars stock. Because not only was the spin-off widely expected, not only was Caesars essentially locked into the decision by its debt load, but the deal isn’t very good for current Caesars shareholders. Morningstar analyst Chad Mollman told Reuters, “Maybe there’s some benefit to raising capital to grow the online division, but have the prospects changed? No. The casino market is saturated. Caesars has terrible returns, about 3 percent return on invested capital, versus 30 percent for the Asian operators.” (Caesars, of course, notoriously passed up its chance to enter Macau in 2006.)

Mollman is right; nothing about this deal changes anything for Caesars shareholders – except, apparently, the share price. Caesars’ operating business is getting $500 million from TPG and Apollo, and foisting off $1.1 billion in debt and a few million more in construction expenses for the Baltimore property. That $1.6 billion change on a $21 billion balance sheet is what’s referred to in business school as “re-arranging the deck chairs on the Titanic.” Indeed, debt insurer Moody’s – which downgraded Caesars debt earlier this month to just two levels about default – told Bloomberg that the announcement would have “no impact” on its ratings, showing the limited potential effect of the spin-off to Caesars’ land-based business. Caesars bond prices rose barely one percent, further proof that the spin-off does not materially change the company’s balance sheet, or mitigate its substantial risk of default or restructuring.

In fact, the only real change is negative for Caesars shareholders. By contributing $500 million to the spin-off, TPG and Apollo will now likely get a larger share of GCP – the only part of Caesars anybody actually wants. With some Caesars Interactive shares already sold to Rock Gaming – a Caesars partner in Baltimore and elsewhere – Caesars shareholders are seeing the size of their stake in the online gambling and social gaming businesses continue to shrink. So this transaction essentially moves value from the iGaming business – the part that is worth something – to the legacy operating business – the part that is likely not worth anything at all.

That this move created half a billion in market value for CZR stock simply makes no sense. The market is being irrational; this week’s gain at Caesars is simply not supported by the fundamental facts of the deal. The only reason to buy CZR stock is to bet that the company can create a substantial, profitable online gambling and social franchise. What happened this week does not, in any real way, increase the interactive division’s prospects. $500 million is nice for that division to have; but a shrinking ownership stake and the addition of over $1 billion in debt does not seem a very fair price to pay for that cash. Simply put, the market is being irrational. The question going forward is who will go bust first: the shorts or Caesars?