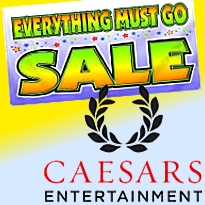 Casino operator Caesars Entertainment may sell minority stakes in its online division Caesars Interactive and some of its land-based casino holdings as it struggles to wriggle out from its crushing $20b+ debt load. Caesars, which is scheduled to release its Q4 and FY 2012 earnings report on Feb. 25, has already issued a dire preview, saying the estimated loss for the fourth quarter could range from $452m to $556m on revenue of $1.55b to $1.58b.

If the loss comes in at the top of that range, it would be more than double the $268m analysts were projecting and the $246.9m loss Caesars reported in Q4 2011. Analysts had also expected revenues to hit $2.11b. Caesars says between $30m and $35m of the loss can be attributed to October’s Hurricane Sandy, which closed casinos in Atlantic City, where Caesars is heavily invested. Unlike its US casino counterparts with lucrative operations in Asia, Caesars hasn’t posted a profit since 2009. In a bid to reverse this four-years-and-counting negative trend, Caesars is frantically attempting to establish any kind of foothold in Asia, recently inking a joint venture on a proposed casino project in South Korea.

To kick its debt can a little further down the road, Caesars announced it will offer $1.5b of seven-year, 9% senior secured notes to help pay other loans that have come due. If there’s anything left over, Caesars intends to use it to pay related fees and expenses, such as new mega-wide ledgers to allow for all those extra zeroes it keeps adding to its accounts payable column. In the most serious indication that Caesars needs money ASAP, a filing with the Securities Exchange Commission (SEC) says Caesars is considering selling off pieces of the Planet Hollywood casino in Las Vegas and its proposed casino in Baltimore.

Caesars’ SEC filing indicated it may also sell off part of its Caesars Interactive division, which includes the World Series of Poker brand, the Playtika and Buffalo Studios social gaming operations and all its hopes and dreams for one day offering regulated online poker to US residents. Last fall, rumors spread that Caesars would spin off the Interactive division into a separate company before the parent company was forced into Chapter 11 bankruptcy restructuring. Caesars’ execs have touted the Interactive division’s profitability although they’ve declined to make its allegedly rosy balance sheet public. Whatever its actual potential, if nothing else, its perceived value would get a boost if New Jersey Gov. Chris Christie were to approve his state’s online gambling legislation this Thursday.