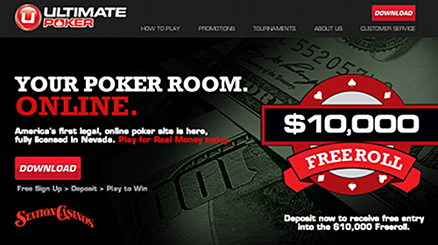 Ultimate Poker made headlines around the world on Tuesday by becoming the first Nevada-licensed company to offer real-money online poker to players within state limits. Ultimate Poker is the online poker branch of Ultimate Gaming, the offshoot of Fertitta Interactive (itself the offshoot of Nevada-based casino operator Station Casinos), which received a Nevada interactive gambling operator license in October and whose bid to supply their own online poker technology was okayed by regulators earlier this month. The site officially went live at 9am PST on Tuesday.

Nevada Gambling Control Board chairman A.G. Burnett stated that while Ultimate Poker’s software – developed by CyberArts, the company Fertitta Interactive acquired in October 2011 – had been approved by the state’s independent testing labs, Tuesday’s launch was in effect a ‘beta’ test. “This truly is new ground. Everyone who meets the age criteria is welcome to test and play.” Burnett said Ultimate Poker’s performance would be reviewed in 30 days at a public hearing.

WHO, WHAT, WHERE
Players must provide their social security numbers as well as an address listed on some form of a government-issued ID to verify that they are 21 years of age or older. They must also be physically present within Nevada borders to log on and play a poker hand. Players must submit a mobile phone number so that CAMS – Ultimate Poker’s geolocation detectives – can triangulate the digital signal to determine it’s coming from within Nevada’s geographical borders. A text message will be sent to this mobile, and a response will be mandatory before play can commence.

Ultimate Poker product manager Chris Danek told the 2+2 forum that the site will check this triangulation “randomly (when you log in, periodically while you play, more often based on where you are in the state, etc).” Play will not be permitted by computers running a virtual private network (VPN). Mobile provider Verizon has yet to sign on with Ultimate Poker’s program, meaning Verizon customers will either have to wait or sign up for another mobile account with a different provider. Danek said the Verizon issue will be resolved in “hopefully a matter of days.”

Interestingly, the site allows out-of-state players to set up accounts and deposit money via Mastercard, e-check or bank wire, but those players will still have to physically travel to Nevada to sit at an Ultimate Poker table. Both Ultimate Poker and Nevada gaming officials have touted the millions of tourists that visit Las Vegas as indicative of the potential liquidity beyond the state’s miniscule population, but this always seemed something of a stretch, excluding the several weeks each summer during which hordes of poker players descend on the state for the World Series of Poker.

There is as yet no Mac client, and the PC client is a bare-bones affair. Ultimate Poker apparently felt it was more important to write ‘FIRST!’ in the history books’ comments section than to offer a product comparable to the state of the art offering available via international online gambling sites.

While their product can’t (yet) compare, Ultimate Poker’s rake system appears to have been ‘inspired’ by PokerStars, with No Limit game rake set at 4.5% and fixed limit rake of 4%. The site is planning its first Sunday $10k multi-table tournament for May 5. Danek says a VIP program is coming “very soon.”

ULTIMATE WHOOPS?
Long before Tuesday’s launch, many players had questioned the wisdom of using the word ‘Ultimate’ in any new online poker venture, given the sordid history of the Ultimate Bet cheating scandal and that site’s post-Black Friday implosion. Then one of the first players to attempt to register at the Ultimate Poker site received a notice that said simply “IOVation Error.” IOVation, if you recall, is the company set up by Greg Pierson that provided Ultimate Bet’s software and created the ‘God mode’ that allowed Russ Hamilton and others to view their opponents’ hole cards.

Danek responded to these concerns on with the following: “IOVation has zero access to our software, our database, our hands, our company, our location. We send them a “packet” of information (actually through another vendor called Verifi) that contains a player’s SSN/Name/Address/DOB and they tell us yes, no, or maybe so.”

FIRST, BUT NOT FIRST LEGAL
In announcing the launch, Ultimate Gaming CEO Tobin Prior referenced the ‘Black Friday’ indictments that brought the US-facing online poker world to a standstill on April 15, 2011. Prior called April 30 ‘Trusting Tuesday,’ saying players would now “be able to play with people they can trust and know the highest regulatory standards have been applied.” Ultimate Gaming chairman Tom Breitling said the launch was “an opportunity to show the world how to properly run online poker.”

Despite the hype (and lack of humility), Ultimate Poker’s launch is far from the first online wagering permitted in the state. Nevada’s licensed sportsbooks have been accepting wagers via the web and mobile device for some years now. Before that, plenty of US states enjoyed legal online betting on horseraces via advance deposit wagering sites, all sanctioned under the terms of the federal Interstate Horse Racing Act (IHRA).

There are those who would argue that America’s ‘legal online gambling’ cherry was popped years ago by international companies licensed in jurisdictions such as Antigua, whose legal right to offer online gambling services to US residents was upheld by the World Trade Organization nearly a decade ago, and that judgment has gone on to withstand every single protectionist appeal by US trade authorities. Similarly, jurisdictions such as the Kahnawake Mohawks have long argued that their indigenous rights allow them to offer services to the US.

With all due respect to Breitling, the most significant difference between his site and the international online poker sites is that Ultimate Poker’s eCom channels won’t be subject to constant harassment by the US Department of Justice. As such, Tuesday’s launch only served to emphasize the hypocritical double standard the US applies in determining the ‘legality’ of online gambling, in which domestic companies are deemed plucky entrepreneurs and foreigners are deemed existential threats.