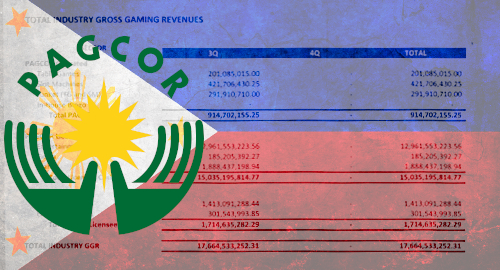 However, the Q3 2020 sum is a significant improvement from the P2.4b the market generated in the three months ending June 30, a period in which nearly all gambling operations – both land-based and online – were closed due to the local impact of the COVID-19 pandemic.

PAGCOR became increasingly stingy with its statistics as the pandemic took hold, but the Q3 report represents a new nadir. Unlike the year’s first two quarterly reports, the regulator didn’t even provide year-to-date totals this time. Instead, the Q3 figures are simply replicated in the ‘total’ column. Insightful, it ain’t.

The PAGCOR-licensed casinos in Manila’s Entertainment City gaming zone accounted for nearly P13b of Q3’s revenue, down from P42.8b in Q3 2019. The Q3 figures don’t indicate how much of the Entertainment City revenue was derived from junket operators versus direct play, nor how much came from tables versus slots.

The locals-focused bingo and e-games segments combined for P1.7b, down 72% year-on-year, with bingo faring slightly better than e-games.

There’s still no indication as for which PAGCOR category now includes revenue from Philippine Offshore Gaming Operators (POGO), from which PAGCOR earned P1.33b in Q3 2019.

After being forced to shut when the pandemic hit, many POGOs chose not to resume operations due to their Chinese workers returning home. Some opted to remain shut after learning that the government would demand stricter regulatory compliance going forward, while others flew the coop after the government imposed a punitive 5% tax on their gambling turnover.

Earlier this month, word spread that the Philippines had authorized some Manila casinos to offer online gambling as a means of offsetting their reduced customer capacity. PAGCOR subsequently clarified that, while some casinos had submitted applications for online play, these applications were “still being studied by PAGCOR’s concerned departments.”

The Philippines prohibited POGOs from serving local gamblers but the government has recently been making noise about authorizing online cockfighting aka e-sabong, which is enormously popular with local gamblers, as a means of replacing some of that lost POGO revenue.

Meanwhile, PAGCOR announced this week that it would allocate US$41.5m to building evacuation centers in areas of the country that find themselves in the path of devastating storms such as Typhoon Ulysses, which cut a swathe through the region earlier this month.