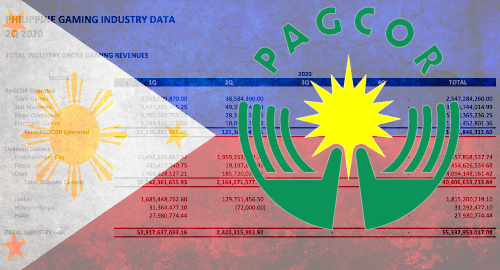 The Philippine gambling market saw its revenue fall over 95% between the first and second quarters of 2020, but online gambling operators apparently contributed precisely nothing to this total.

PAGCOR has dramatically revamped its financial reporting tables, and not in a way that offers more insight into locally licensed gambling operations. For instance, the data on Philippine Offshore Gaming Operators (POGOs) appears to have been folded into one of the categories that remain, although which one isn’t exactly clear.

POGOs were ordered to close in mid-March as the Philippines struggled with its surging COVID-19 infections, which also severely limited land-based gambling options. The first POGO sites weren’t cleared to reopen until late-June, so it’s possible there was simply no POGO revenue in Q2 to report.

But PAGCOR has also gone back and reformatted its Q1 figures to match the current, more streamlined Q2 report. And that Q1 report also doesn’t show a POGO category, despite PAGCOR reporting revenue of P1.8b when it issued that original Q1 report in June.

There are other curious discrepancies between PAGCOR’s original Q1 report and the updated version. The regulator previously disclosed the share of revenue derived from junket operators at its own Casino Filipino operations as well as the privately-run, PAGCOR-licensed casinos in Manila’s Entertainment City gaming zone.

In the original Q1 report, the Entertainment City casinos reported junket-based VIP gambling revenue of P10.1b. In the revised Q1 report, there’s a single column simply titled ‘junket’ that cites a figure of just under P1.7b.

PAGCOR hasn’t revealed what prompted this wholesale revamp, but the change came after a public gaffe by the regulator’s accountants, who accidentally double-counted the Casino Filipino revenue stats in the original Q1 report. (PAGCOR rushed out a corrected version a day later.)

At any rate, here’s what the current report states. ‘PAGCOR Operated’ gaming revenue fell from P12.9b in Q1 to just P126.4m in Q2. The Entertainment City venues went from P33.9b to less than P2b, while the casinos in the Clark freeport fell from P3.9b to P186m.

The Philippines’ Bureau of Internal Revenue has so far cleared just 29 of the 55 licensed POGOs to resume operations but many of the others may be rethinking the wisdom of reopening at all after the government announced plans this week to hike the sector’s franchise tax from 5% of revenue to 5% of turnover. The new tax is tipped to raise P17.5b for government coffers this year, assuming there are any POGOs left to tax.