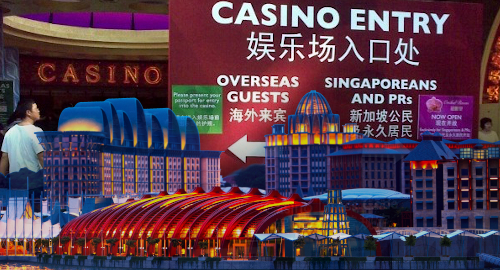 Among the observations made in the report by CRA chairman Tan Tee How was that the April 2019 increases in the daily and annual entry levies for local residents wishing to gamble at either of the two integrated resorts had pushed the number of locals gambling in casinos down from 4% of the adult population in FY19 to 2.7% in FY20.

The number of locals interested in casino gambling has been on the decline for some time and Singapore boasts an enviably low problem gambling rate. That rate has trended consistently downward following the 2010 launch of the two casinos despite a rise in overall gambling participation over the same period.

The CRA doled out S$145k (US$106k) in penalties against MBS in the most recent year, a nearly tenfold rise from the SG$15k MBS paid the previous year. The vast bulk of the penalties were directly related to the levy issue, including the casino’s failure to implement a system for collecting levies and the failure to prevent 11 locals from accessing the gaming floor without paying the levies.

By contrast, RWS incurred only a single penalty of SG$20k for allowing a single underage customer onto its gaming floor. That compares quite favorably to the SG$730k in penalties RWS paid the previous year, although RWS also received a letter of censure for failing to secure the CRA’s approval before rolling out some new gaming equipment.

The CRA is in the process of a major regulatory shakeup that will see it merge operations with the city-state’s other gambling boards to create a Gambling Regulatory Authority (GRA) with oversight of all gaming operations, both land-based and online. The GRA is expected to arrive sometime next year.

Chairman Tan said this week that the regulatory challenges ahead covered three main areas: technology providing increased access to gambling; the injection of gambling into non-gambling products (such as loot boxes in video games); and the rise of eSports, with the increased likelihood of youths becoming involved in eSports betting.

Despite operating under pandemic restrictions, MBS was the only Las Vegas Sands property to report positive earnings in the third quarter of 2020, a fact that may have played a role in the company’s apparent willingness to sell its remaining Nevada casino properties.

Given their reliance on international gamblers, both  casinos are welcoming Thursday’s announcement by Singapore’s Civil Aviation Authority that it was relaxing some restrictions on in-bound travelers. As of Friday (Oct. 30), individuals from mainland China and the Australian state of Victoria could apply for an ‘Air Travel Pass’ for flights arriving on or after November 6.

If applicants can demonstrate that they haven’t traveled outside their respective zones in the 14 days prior to arriving in Singapore, tourists from these two areas will be exempt from Singapore’s 14-day COVID-19 quarantine policy.

Singapore previously exempted travelers from other regions of Australia, New Zealand and Vietnam. Singapore and Hong Kong are also teaming up on a ‘travel bubble’ that will permit quarantine-free travel between the two regions sometime in November.