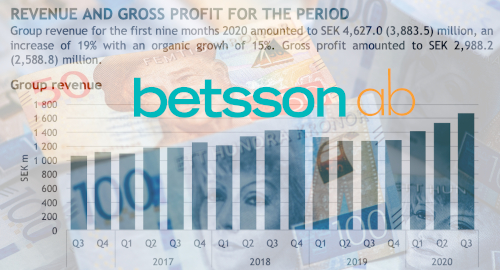 Online gambling operator Betsson AB saw its profits jump by three-fifths in the third quarter thanks to a surge in customer activity.

Figures released Friday by the Stockhom-listed Betsson show revenue of SEK1.67b (US$191.1m) in the three months ending September 30, up 31% from the same period last year and a new company record (for the second straight quarter). Earnings did even better, rising 37% to SEK416.6m while net income spiked 60% to SEK290.6m.

To be clear, Q3 2019 was a downer for Betsson due to its struggles to adapt to Sweden’s regulated online market and disruptions to its Dutch– and Norwegian-facing operations. That quarter also showed an 8% fall in active customers, while Q3 2020 showed active customers up 46% to a record 920k and customer deposits jumping 53%.

Sports betting got a lift from this summer’s resumption of major league play, pushing revenue up 12% to SEK352.6m despite margins falling 0.8 points to 7%. Revenue from ‘other products’ spoiled the positive narrative, falling 4% to SEK17.6m.

All of Betsson’s geographic regions reported positive growth, including its mainstay Nordic markets, which shot up 17% (5% organic) to SEK559m. Western Europe rose 23% (3% organic) to SEK486.5m, Central & Eastern Europe and Central Asia gained 40% to SEK447m while the Rest of the World posted the biggest improvement, more than doubling to SEK184.2m.

Betsson CEO Pontus Lindwall credited the Nordic rebound to the company’s new ‘pay and play’ Jalla Casino brand, which made its Swedish debut in April. The company’s Latin American operations got a boost from last year’s acquisition of Brazil’s Suaposta and Betsson followed that up in Q3 by taking a 70% stake in Colombia-licensed Colbet.

In the UK, this week saw Betsson announce a new streamlined approach focusing on the Rizk brand the company acquired in February. Rizk was recently granted an online casino license in Croatia so the brand appears to feature prominently in Betsson’s regional expansion strategy.

Trading to date in the current quarter has daily revenue up around 45% from the full Q4 2019 daily average, although Betsson qualified that this was in part due to an “unusually high” sportsbook margin.