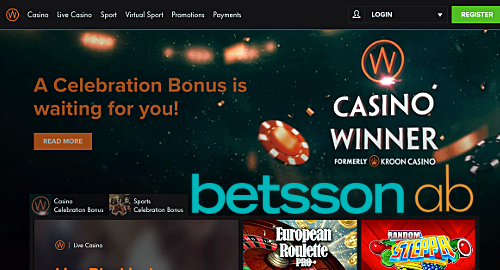 Online gambling operator Betsson AB is rebranding its two main Dutch-facing online casinos after they were penalized by the local gambling regulator.

As of Wednesday (24), the krooncasino.com domain is already redirecting customers to the Casino Winner site and offering customers a ‘celebration bonus’ to compensate for any disorientation they might experience. Oranjecasino.com remains active for the time being but some Dutch affiliates claim the switch will be made next month.

Last August, the Netherlands’ Kansspelautoriteit (KSA) regulatory body imposed a €300k fine on Betsson’s Corona Ltd subsidiary, under which the Oranje and Kroon brands operate. The sites were accused of allowing Dutch customers to gamble via the sites without the KSA’s permission.

Betsson has appealed this fine, based on its belief that the sites had complied with all applicable laws in the absence of “EU-compliant gambling legislation” in the Netherlands. Betsson has been among the most vocal critics of Dutch gambling laws and the KSA’s efforts to punish operators who had no opportunity for local licensing under the previous legal climate.

The Netherlands approved new online gambling legislation in February but it may not be until mid-2020 before the KSA invites international operators to apply for Dutch licenses. The wait will be up to two years longer for operators that the KSA deemed to be ‘cowboys,’ i.e. ignoring the KSA’s clear ‘steer clear’ edicts.

It’s unclear whether Betsson’s rebranding efforts will accelerate the removal of the regulatory stigma currently attached to its Dutch-facing brands. Betsson may offer further insights into its thinking when the company releases its financial report card for the first quarter of 2019 on May 7.