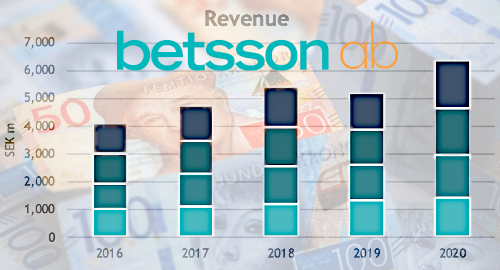 Nordic online gambling operator Betsson AB closed out 2020 with a solid showing in the final quarter, resulting in a more than one-quarter rise in annual profit.

Online casino remained Betsson’s bread and butter in Q4, as gaming revenue rose one-third to SEK1.28b, although sports betting revenue spiked 47% to SEK459m as a half-point rise in betting margins added fuel to a 23% rise in turnover.

On a geographic basis, all four regional segments reported solid growth in Q4, with the biggest percentage gain coming from the ‘Rest of World’, which nearly tripled to SEK215.6m. The gains reflect Betsson’s 2019 acquisition of Brazilian race betting operator Suaposta and a 70% stake in Colombia-licensed Colbet, as well as the December launch of its Betsafe brand in Kenya. The RoW gains doubled the segment’s share of Betsson’s overall Q4 revenue to 12%.

For 2020 as a whole, overall revenue rose 24% to SEK6.4b, earnings gained 21% to SEK1.5b and profit improved 24% to SEK991m. The annual vertical split reflects last spring’s halt to major sports events, as betting revenue gained 12% to SEK1.4b while online casino picked up the slack, rising 27% to SEK4.9b.

Betsson’s board recommended the distribution of a dividend equal to SEK3.68 per share, up from SEK2.88 at this time last year. That wasn’t enough to impress investors, who pushed the company’s share price down 7.6% by the close of Tuesday’s trading.

Shareholders appear to have been spooked by Betsson’s comments regarding Germany’s new regulated online gambling market, which is set to take effect on July 1. The new regime includes strict deposit and stake limits on online casino products, plus a possible punitive 8% tax on online slots turnover. Online table games will only be permitted on a state-by-state basis, and many of Germany’s 16 states may opt against legalizing table play, at least initially.

Betsson also noted that it won’t qualify for a license in the Netherlands’ new regulated online market until well after many of its rivals are eligible to launch. Betsson was among the numerous operators stuck in a penalty box by Dutch gambling regulators for continuing to serve the market without local permission, a charge the company continues to challenge in court (although efforts to date have proven unsuccessful).