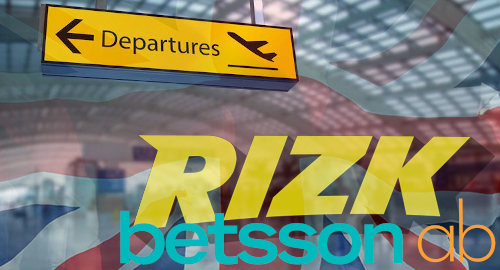 It’s not quite a full Brexit, but Nordic online gambling operator Betsson AB is significantly reducing its UK market presence as it streamlines an overly busy brand strategy.

On Wednesday, the Stockholm-listed Betsson announced that it was reducing its current UK market presence from “nine brands, on three different platforms, and under four licences” to a single brand. That brand, Rizk, was acquired from Gaming Innovation Group earlier this year along with three other gaming brands.

Betsson said the closure of the eight UK-facing brands – Betsafe, Betsson, Casino Euro, Guts, Kaboo, Live Roulette, Jackpot247 and Racebets – would take effect immediately with no further deposits or bets accepted on these sites. Customers have been reassured as to the safety of their account balances and all outstanding bets will be paid out as winning bets.

Betsson will be handing back three of its UK licenses to the UK Gambling Commission, while the now dormant UK brands will be retained for use in other markets, eliminating the need for any goodwill or trademark write-downs.

Betsson said the UK market accounted for only around 3% of group revenue and the market’s increasingly strict oversight of online gambling operations has required “extensive investments both in technology, regulatory compliance as well as marketing, which is not sustainable with the group’s current UK setup.”

Betsson claimed that its new UK strategy would “increase efficiency and have a positive impact on the contribution from its UK business. It will also enable resources to be reallocated for profitable growth in other markets.”

Betsson acquired a fleet of UK-facing brands via its 2017 acquisition of NetPlay but that deal, which was midwifed by former CEO Ulrik Bengtsson, never produced the expected returns. Betsson began reducing its UK marketing spend in 2018 and transferred some NetPlay operations to Malta later that year as part of an efficiency push.

Betsson’s current CEO Pontus Lindwall will likely have more to say regarding its UK strategy on Friday, when the company releases its Q3 financial report card.

Betsson’s Italian market strategy got a boost this month from the extension of its relationship with local footballers AC Milan. Betsson’s StarCasino brand was a longtime sponsor of the club but signed a new marketing partnership with the team this summer that has now been extended for a further three years.