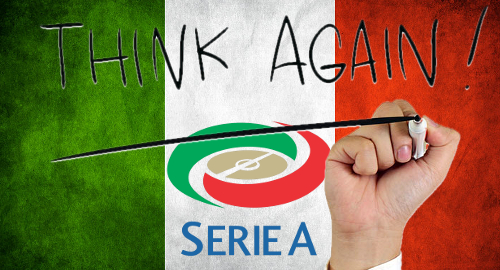 Italy’s top football league is asking the government to relax its gambling advertising rules to help the sport recover from the COVID-19 pandemic, while retail gambling operators are catching a viral tax break.

On Thursday, authorities from the Serie A football league offered a series of suggestions to the Italian government regarding ways to help the sport recover from the current suspension of play caused by the COVID-19 coronavirus.

Among these suggestions was scrapping the blanket prohibition on gambling advertising and sponsorships that the government announced in 2018 via the so-called Dignity Decree. The sponsorship ban alone, which took effect last summer, is projected to cost Serie A teams around €100m in lost revenue on an annual basis.

That loss looks even worse given the losses the league and its members are now facing given Italy’s virus-related ban on public gatherings. In addition to lost ticket and concession revenue, the teams could face the loss of TV revenue should the currently suspended season be abandoned altogether.

Italy’s football authorities have expressed hope that the current season could resume play on May 2 and conclude by the end of June or mid-July. But with 12 Serie A players already having tested positive for COVID-19 and the country’s viral death toll now surpassing China’s, the season’s future is anything but assured.

Among the sectors that will obtain some fiscal relief is Italy’s land-based gaming industry, which was laid low by the country’s unprecedented lockdown earlier this month. Among the operators most affected is Playtech, which acquired the land-based and online operations of local operator Snaitech in 2018 and recently announced that Italy’s retail shutdown would reduce earnings by €3m per month.

The government now says that video lottery terminal (VLT) and amusement with prizes (AWP) operators – who were already toiling under increased taxes and stricter customer ID requirements – will be allowed to delay payment of tax and license fees until May 29. Bingo operators also caught a break, with license fees suspended for the duration of the virus-related shutdown.